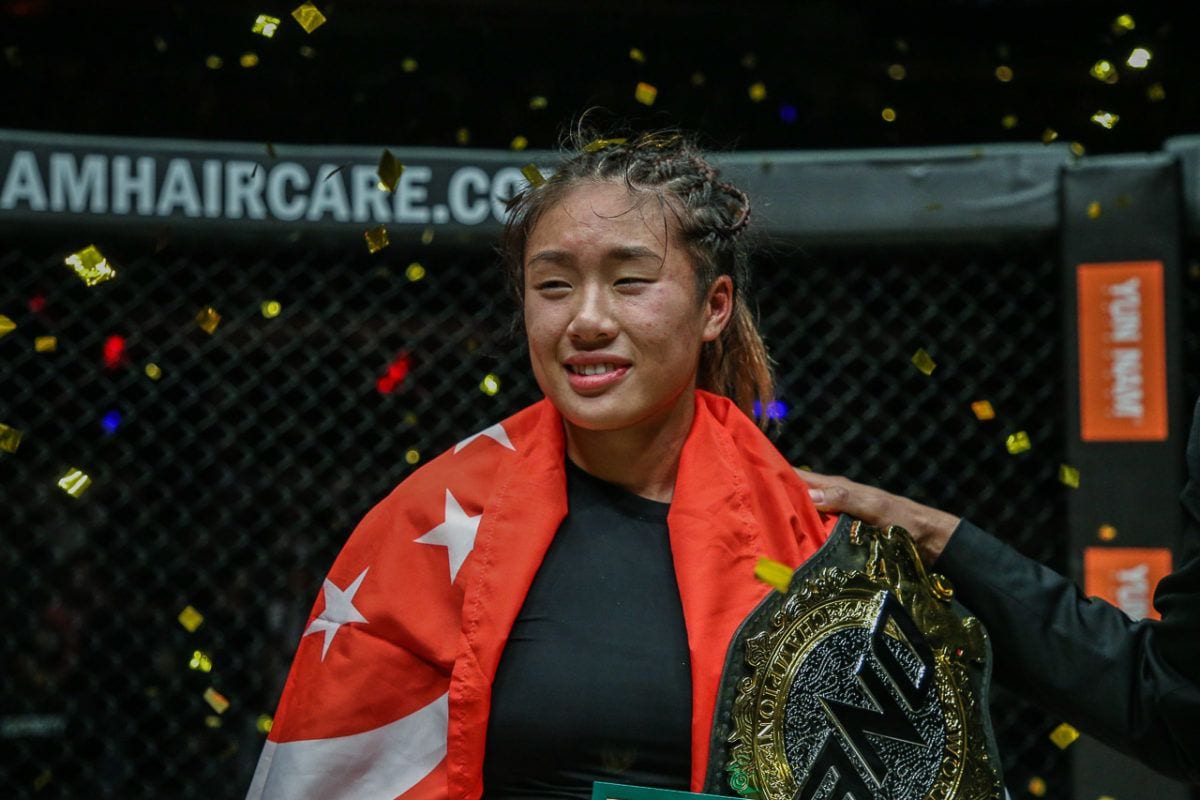 In the main event of ONE Century part one, Angela Lee defends her ONE atomweight championship against Xiong Jing Nan.

Xiong lands a big shot to start things off. A hard leg hick and hooks from Xiong. Another big right hand for Xiong. Lee fails on a takedown attempt and Xiong circles out. Another big combination lands for Xiong. Lee presses Xiong against the cage now as they exchange knees. A front kick to the body lands for Lee.

Lee working on Xiong clinched against the cage again after eating a big shot. They separate and Xiong connects on another big combo. Lee again clinches but eats an overhand. Lee shoots in and fails on a trip takedown to end the round.

A very nice spinning back kick lands for Xiong. They clinch again with Lee pressing Xiong against the cage. Lee can’t quite get Xiong down and now it’s Xiong pressing Lee against the cage. Lee takes dominant position back but Xiong is able to escape. Very nice hook combination lands for Xiong. Lee in on a single leg now and gets it. Xiong is holding Lee down well, not allowing her to posture up and get much off. Some knees to the head from Lee to end the round.

Xiong connects on a short hook as Lee shoots in. They clinch and Xiong gets off some nice knees to the body. Lee catches a kick but Xiong defends the takedown attempt. Lee gets a nice judo throw on Xiong and she’s against the cage. A very nice scramble now and Lee takes the back of Xiong. Lee is able to get a body lock now and is working for a choke. Lee is unable to get the choke and gets off some shots to the head to end the round.

A very nice 1-2 lands for Xiong to open the round. A big combination drops Lee and Xiong nails Lee’s chest as she gets back up with a kick. Lee presses forward now and presses Xiong against the cage. Xiong connects with a couple of right hands on the break of a clinch. Lee with a leg kick and Xiong connects on a few hooks off a Lee high kick. Lee lands a nice hook and throws a flying knee that just misses to end the round.

Xiong gets off a hook to start off the round. Body kicks from Lee and Xiong knocks Lee off balance with a leg kick. Lee pressing Xiong against the cage now and lands some nice knees to the stomach. Xiong starting to tee off now, and Lee going for a takedown, she gets a massive german suplex takedown and is working to take Xiong’s back. Lee dropping some shots but is working to improve position. Lee working for the choke now, she gets it under the chin, and submits Xiong with seconds left. Amazing finish.