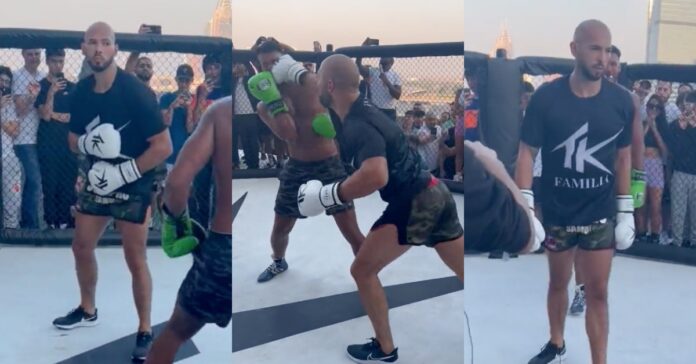 Controversial and outspoken social media commenter and influencer, Andrew Tate recently gathered quite the crowd to take in a sparring session of his inside an Octagon in Abu Dhabi, UAE – with the former Kickboxing world champion donning the gloves in some short footage captured.

Tate, a former kickboxing world champion, has been criticized majorly across social media in recent months, after the outspoken former combat sports featured shared his thoughts – often misogynistic and flagrant on women and modern-day values.

Deplatformed across social media in the past as well as claiming the likes of Uber, and Airbnb have cancelled his accounts in a mass attempt to silence and limit his movements, Andrew Tate had featured heavily in Abu Dhabi, UAE ahead of UFC 280 earlier this month.

Appearing at a nightclub in the Middle East ahead of the flagship event, Andrew Tate, along with his brother, Tristan Tate snapped photos with reigning UFC welterweight champion, Leon Edwards.

And ahead of UFC 280 last weekend, Tate was pictured with undisputed UFC bantamweight champion, Aljamain Sterling, who managed to defeat T.J. Dillashaw at the event in a co-main event bracket.

Following the showcase, Tate also appeared on a podcast with UFC bantamweight contender, Sean O’Malley – who managed to earn the #1 rank in the division with a close, split decision win against Petr Yan.

Andrew Tate spars inside an Octagon in Abu Dhabi, UAE

Across social media this Thursday evening, footage has emerged of American-born British outcast, Tate sparring in the final 10 seconds of a round against another fighter – landing an impressive overhand striker before evading as the round came to a close.

Tate, 35, competed three times in professional mixed martial arts – establishing a 2-1 record, including an amateur unanimous decision win over UFC alum, Luke Barnatt in March 2010. In his most recent kickboxing outing back in December 2020, Tate defeated Cosmin Lingurar with a unanimous decision effort.