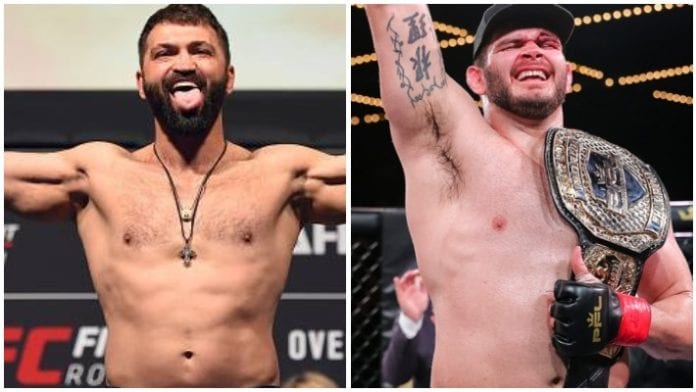 Heavyweight legend Andrei Arlovski will face off against UFC debutant Philipe Lins on May 13 in Jacksonville, Florida.

Arlovski took to social media on Monday to announce he’s the latest addition to the card, he wrote the following alongside a photo of his bout agreement.

“So, looks like I was right, AGAIN ! @danawhite @firstroundmgmt working hard to get fighters back to ‘work’ )) I’m super pumped !!!”

The 41-year-old Arlovski is hoping to get back to winning ways after falling short against rising star Jairzinho Rozenstruik last time out. He suffered a quick stoppage defeat at the hands of the unbeaten heavyweight who needed less than 30 seconds to improve his record.

Lins will be making his UFC debut and fighting for the first time since 2018 on May 16. The 34-year-old Brazilian was last seen winning the PFL heavyweight tournament stopping Josh Copeland to do so. His current win streak stands at four in a row and includes a win over former UFC heavyweight Jared Rosholt.

Light-heavyweight contender Anthony Smith will square off against Glover Teixeira in the main event on May 13. The pair were originally supposed to fight at UFC Lincoln. The card was unfortunately cancelled due to the ongoing coronavirus pandemic, but they will now be able to get it in just a few weeks’ time.

Smith will be looking to work his way back into title contention after falling short in his 205lb title fight against Jon Jones. Last time out he beat long-time contender Alexander Gustafsson and now has the chance to add another top fighter to his list. Despite being 40-years-old Teixeria is still a force to be reckoned with at light-heavyweight. He is riding a three-fight win streak and will be hoping to earn another title shot himself by taking out one of the divisions best.

Who do you think wins, Andrei Arlovski or Philipe Lins?