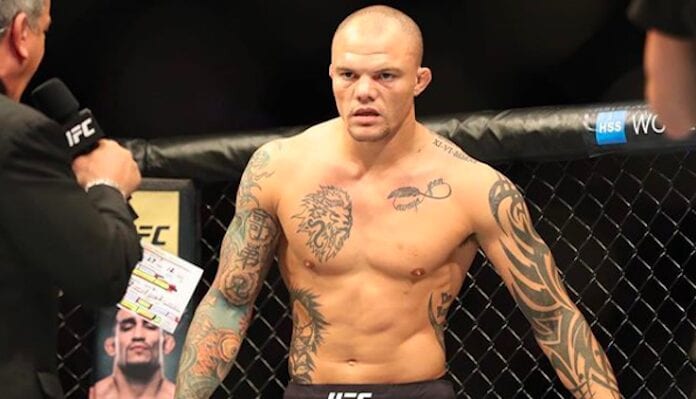 The UFC has revealed the main events for two upcoming cards which were announced earlier today.

UFC President Dana White announced UFC 249 would take place at the VyStar Veterans Memorial Arena in Jacksonville, Florida. Two other fight night cards will also take place at the arena on May 13 and on May 16.

Light-heavyweight contender Anthony Smith will square off against Glover Teixeira in the main event on May 13. The pair were originally supposed to fight at UFC Lincoln tomorrow. The card was unfortunately cancelled due to the ongoing coronavirus pandemic, but they will now be able to get it in just a few weeks’ time.

Smith will be looking to work his way back into title contention after falling short in his 205lb title fight against Jon Jones. Last time out he beat long-time contender Alexander Gustafsson and now has the chance to add another top fighter to his list. Despite being 40-years-old Teixeria is still a force to be reckoned with at light-heavyweight. He is riding a three-fight win streak and will be hoping to earn another title shot himself by taking out one of the divisions best.

Three days later MMA legend Alistair Overeem will headline in another rebooked main event against Walt Harris. The heavyweight duo was due to meet at UFC Portland on April 11. Now the fight will take place in Florida on May 16.

Overeem will be desperate to get back in the win column after falling at the last hurdle against Jairzinho Rozenstruik last time out. Harris is currently riding a two-fight win streak and will want to make it three in a row. He will be returning to the cage for the first time since the death of his stepdaughter Aniah Blanchard last year. (Per MMA Junkie)

Are you excited to see these two new UFC main event fights next month?