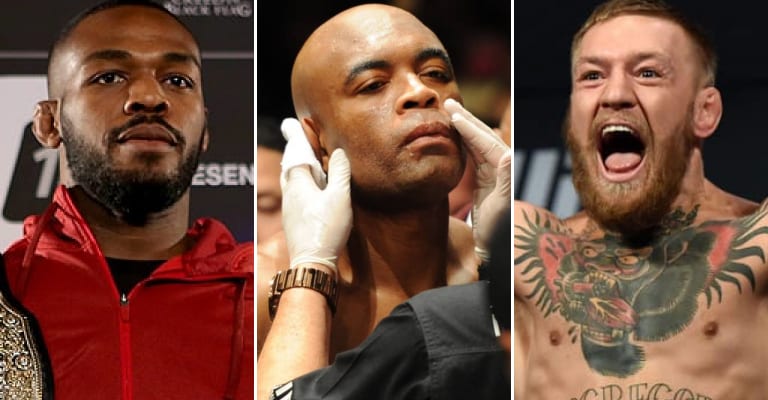 Anderson Silva is back.

The longtime former UFC middleweight champion was recently exonerated for a failed USADA drug test prior to his scheduled bout against Kelvin Gastelum last fall and is eligible to return to competition on November 10 after it was found he had ingested a contaminated supplement.

“The Spider” is understandably excited to have his legacy intact after his status as one of the greatest of all-time was brought into serious question when he tested positive for banned substances a second time. With his reputation now less tarnished, Silva recently sounded off to MMA Fighting about two other legendary fighters with outside-the-cage troubles, Jon Jones and Conor McGregor.

First, Silva detailed his opinion of Jones’ current situation where the disgraced former light heavyweight ruler currently awaits potential punishment from USADA for his failed drug test prior to his UFC 214 knockout win over Daniel Cormier last summer. “The Spider” hoped Jones’ current plight results in a moment of reflection for “Bones,” adding that he ‘deserves our respect’:

”I’m his close friend [of Jones], I have a big affection for him, I see him as a younger brother, and I hope this moment he’s going through is a moment of reflection,” Silva told MMA Fighting. “He’s young and has everything it takes to come back and reclaim what’s his. I’m rooting for him, as always. He’s an amazing guy, a guy that has been through several difficulties, several problems, and deserves our respect.”

Silva then moved on to discuss McGregor, who will appear in court this week to reportedly work out a plea deal for his April arrest in Brooklyn where he threw a metal dolly through a bus containing lightweight champion Khabib Nurmagomedov and other UFC 223 fighters.

Although he didn’t blast “The Notorious” and his actions outright, Silva did say that fighters like himself had worked hard to make the sport of mixed martial arts a viable entertainment option for people of all walks of life, so he hoped McGregor didn’t jeopardize that by committing further crimes and tarnishing the sport’s name:

”Man, I think that not only me but other athletes that worked really hard to turn this sport into a sport to be watched by kids, ladies, women, men, people from all ages and social classes,” Silva said, “And it’s complicated when this kind of thing happens, but who am I to judge? It’s something that must come from each person.

”Athletes have to have this conscience. Everybody has problems, everybody goes through situations, and I hope he realizes how much he means to many people and doesn’t do something like that again and ends up tarnishing a bit of what we worked for this sport.”