LowKickMMA.com
Home Boxing News Anderson Silva reveals that a training partner “knocked him out twice” during... 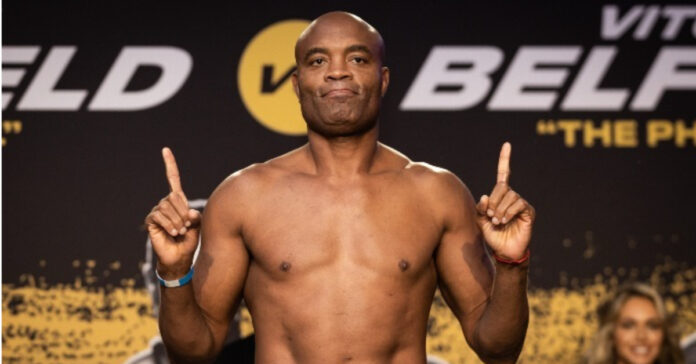 Former UFC middleweight champion, Anderson Silva revealed he has been knocked out twice during his training camp for his boxing match with Jake Paul.

This Saturday in Glendale, Arizona, Silva and Paul are set to do battle over a scheduled eight rounds. As part of his fight-week media duties, Silva spoke to MMAWeekly and would reveal a worrying fact bout his training camp.

“I’m training hard for win — I’m training with the good boxers, high-level, and five guys come to help me,” Silva said. “And the last sparring with [my sparring partner], he is knocked me out two times, and when I finish my training, I talked to my coach and even said, ‘Coach, let me tell you something, why the guys knock me out two times?’ And the coach said, ‘You need to prepare for war, and you prepare for war.’”

Silva’s coach, Luiz Carlos Dorea would respond to Silva’s comments, flatly denying that the events took place in a response to MMAFighting.

“What I can say is that didn’t happen,” he said. “Thank God we follow all the steps in training and Anderson did excellent sparring [sessions]. He’s 100 percent for the fight.” (H/T MMAFighting)

If what Silva is saying is true, it is not good news. Silva is now nearing 50 years old and will take on a young, big, and hard-hitting man who is 22 years his junior.

The card will also feature a super-featherweight bout between Ashton Sylva, who is signed to Paul’s ‘Most Valuable Promotions’, and Braulio Rodriguez.

Doctor Mike, a YouTuber, will take on Chris Avila, a former Bellator and UFC fighter.