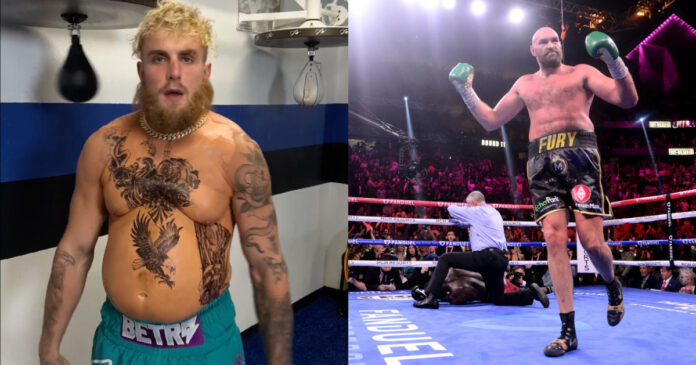 Jake Paul calls out Tyson Fury while wearing a fat suit in a new Twitter video.

Part of the appeal to Paul is his bravado and social media antics, taking aim at anyone and everyone. Some are more venomous, but this time Paul would share a jovial video of him calling out Fury as he prepares for his upcoming clash with fellow heavyweight, Derek Chisora.

Paul is set to take on the biggest test of his boxing career as he takes on former UFC middleweight champion and feared striker, Anderson Silva.

The bout is set to take place at the Desert Diamond Arena and has broken the grossing ticket sales record for a boxing event at the arena.

The pair, who have a 22-year age gap are set to step in the ring at a catchweight of 187lbs and will box over eight rounds.

In a recent video on Showtime, Paul predicted a “knockout of the year”  in the upcoming clash

“He loves to get in that corner and dance, I’m not going to play that s**t,” Paul said.

Who do you think will win, Jake Paul or Anderson Silva?