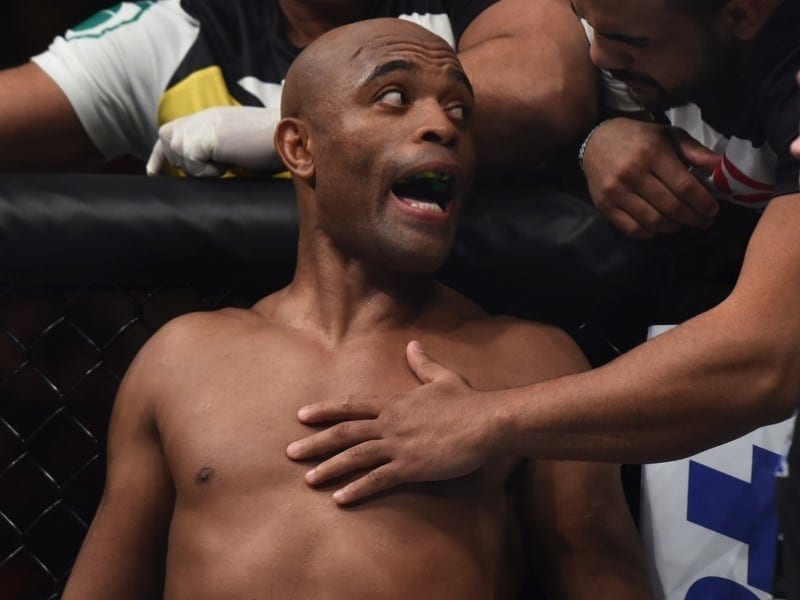 Longtime mixed martial arts legend Anderson Silva was looking to make a triumphant return to the Octagon against Michael Bisping in the main event of today’s (Sat., February 27, 2016) UFC Fight Night 84 from the O2 Arena in London, England, and for a brief moment in the third round, it looked like he had done just that.

However, Bisping was allowed to continue when referee Herb Dean decided not to stop the bout and allowed it to continue on, and Silva didn’t exactly take advantage of the situation despite having the veteran in serious – and bloody – trouble. No, Bisping rallied to win the fourth round on all three judges’ scorecards, and even with a vicious fifth round from ‘The Spider’ that saw him almost finish ‘The Count’ again with a front kick, the once-feared champion couldn’t edge his British counterpart.

Many, including UFC President Dana White, still believe that Silva should have won the unanimous decision 48-47 instead of Bisping, but it didn’t go that way in his home of London. The result is sure to continue inspiring a, shall we say, ‘heated’ debate amongst viewers, and some will cry that the hometown judges played into the bout’s outcome much more than they should have.

Apparently, Silva is one of these people, as he revealed (translated from Portuguese)in his post-fight interview that he believes he did his job and won the fight, but it was taken from him. He likened the result to supposedly ‘corrupt’ results that he’s also seen in his native Brazil:

“Here’s the deal, you can’t win one way, they try to take it away the other way. That’s it,” Silva said. “You saw how that went, right? So, there’s nothing left to say. I fought for you, and that’s it. Thank you for the support. My family, I’m coming back home, I’m fine. Mission accomplished, mission given, but sometimes it’s like in Brazil, total corruption.”

That’s certainly a strong accusation, but it was also an understandably emotional moment for the 40-year-old veteran who is now 0-3(1) in his last four UFC bouts. His critics will say that he didn’t engage enough and instead spent far too much time looking for the perfect counter shot, allowing Bisping to get in close and land numerous combinations.

There would be some truth to that for sure, but then there’s also the other contrasting point of view that Silva did a much higher amount of damage, which was apparent all over Bisping’s face in the form of several cuts and bruises in addition to endlessly flowing blood, which would once again entrench us in the controversial (and endless) discussion of MMA’s flawed scoring system.

Bisping has been accused of winning questionable decisions in his native Great Britain; however, it’s by no fault of his own. At the end of the day, ‘The Count’ took home his biggest win, and Silva has been left with a case of especially sour grapes. No one’s calling for an immediate rematch of an incredibly close and controversial bout, but what really could be next for both fighter?