LowKickMMA.com
Home Global MMA Cory Sandhagen questions if Sean O’Malley is deserving of a matchup with... 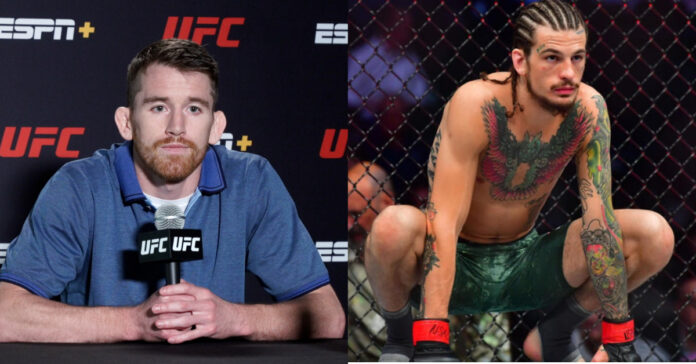 Cory Sandhagen has questioned whether Sean O’Malley is deserving of his upcoming fight against Petr Yan after his last outing against Pedro Munhoz which resulted in a no contest.

Sean O’Malley will have the opportunity to propel himself through the bantamweight rankings and potentially earn a title shot if he can overcome Petr Yan at UFC 280. Despite being extremely popular among the MMA fanbase fellow bantamweight contender Cory Sandhagen, who faces off against Song Yadong in the main event of UFC Fight Night: 210, has weighed in on whether O’Malley deserves to have the opportunity that he has been given.

“Yeah, (I’m) super surprised, We’ll see how it goes for him, I guess. It’s three rounds, so that’s a little bit more of an advantage for O’Malley, but I think Yan is not a stupid guy, and I think that he’s definitely learned from his mistakes in the past, which have been not being aggressive enough in the first round, so I don’t think he’s going to make that same mistake.

“I think Sean’s last showing against Munhoz wasn’t good. Nothing really happened in the first round, and then he poked the guy in the eye in the second one. So whatever narrative has been around that fight, that’s how that fight went, which, should you fight the No. 1 guy after a performance like that? My opinion, no. But what do I know?” Sandhagen told the media ahead of UFC Fight Night: 210.

Cory Sandhagen himself will be looking to get back into the win column and build himself back into title contention ahead of his main-event matchup against Yadong. His last outing saw him fall just short of claiming the interim-bantamweight title when he was beaten by O’Malley’s next opponent, Petr Yan, by unanimous decision.

‘Sandman’ is aware of the skillset Yan will be bringing heading into his matchup with O’Malley and therefore could see the ‘SugaShow’ earning himself a shot at current divisional champion Aljamain Sterling if he can emerge victorious.

“He probably will,” Sandhagen said. “Yan’s a good fighter. Yan almost beat Sterling in his last one. He was kind of beating him in the one before that. So if (O’Malley) wins, then sure, I guess. I don’t really have an opinion about it, and I don’t want to say yes because maybe if I win this weekend, then I can maybe jump in that spot if it’s impressive enough. But I think beating Yan might get you a title shot, yeah.” (Transcribed by MMAJunkie)

Do you think Cory Sandhagen will be able to re-enter the win column this weekend?