LowKickMMA.com
Home UFC News Aljamain Sterling believes Sean O’Malley is ‘getting the McGregor treatment on the... 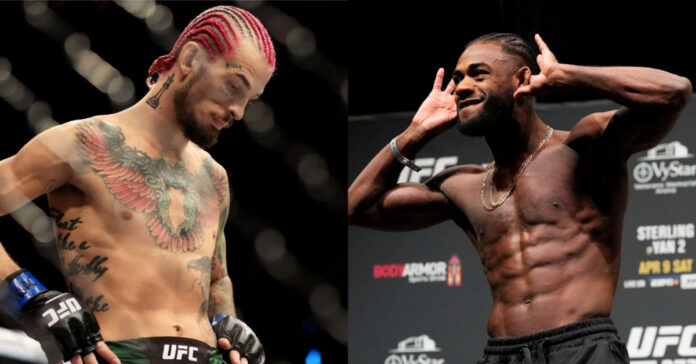 Aljamain Sterling believes UFC is favoring Sean O’Malley as they did with Conor McGregor.

UFC star, Sean O’Malley (15-1) is set to take on number 1 ranked formed Bantamweight Champion Peter Yan (16-3) at UFC 280. Many MMA fans and media members were taken aback when this fight was announced because of the vast difference in rankings between the two. Currently, O’Malley sits outside of the top 10 in Bantamweight, coming at 13.

However, the champ of the division, Aljamain Sterling, believes this is a part of the UFC’s plan to give O’Malley a favorable situation.

“He is literally getting the McGregor treatment on the way to a title shot. This fight gives him the McGregor treatment in terms of stylistic matchups. He has not fought a single grappler outside of Chito, but Chito is not really a grappler. He’s a jiu-jitsu-based fighter who is willing to stand on the feet and if the fight hits the ground he is looking to throw elbows and look for submissions.”

Famously, Conor McGregor had a legendary run through the UFC’s Featherweight division, where he won 5 straight fights before earning a title shot against the legend Jose Aldo. However, many accused the UFC of “protecting” McGregor, as he didn’t face a wrestler or a high-level grappler during the whole time. Which was a glaring weakness of McGregor.

But, the stars would align, and Aldo pulled out of the original match-up against McGregor at UFC 189, and Chad Mendes came in as a replacement. Although Mendes was a high-level grappler, he only had 2 weeks to prepare and his cardio didn’t hold up to McGregor’s bodywork as the Irish superstar took home a 2nd round TKO victory.

Aljamain Sterling believes the UFC is putting O’Malley in the same win-win situation as McGregor got by accepting the Mendes fight on short notice.

“It’s like Conor McGregor fighting Chad Mendes on short notice,” Sterling explained. “It’s one of those things, like here is the layup, I’m throwing it against the backboard, all you have to do is put it in the rim. It’s a win, win.”

Co-headlining the UFC 280 is Aljamain Sterling vs TJ Dillashaw and it’s believed the winner of O’Malley vs Yan will fight next for the title. So, perhaps Sterling and O’Malley will be able to settle their differences inside the octagon soon enough.