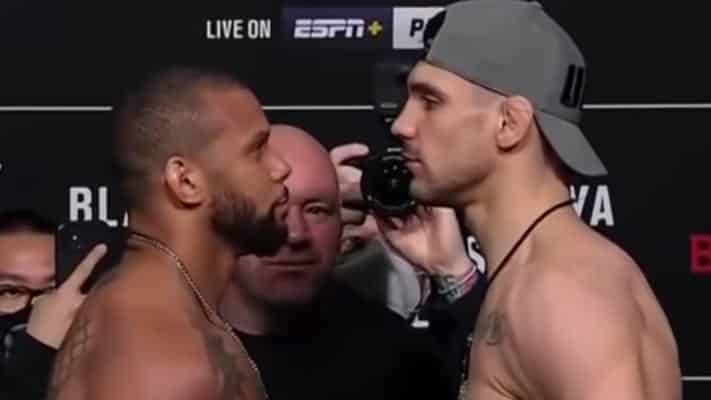 Kicking off the UFC 259 main card is a light heavyweight contest between Thiago Santos and Aleksandar Rakic.

Round 1: A lot of feinting early on with Rakic commanding the center. Santos misses with a leg kick but lands an inside leg kick soon after. Santos lands a body shot. Rakic lands a big leg kick. Both fighters throw kicks at the same time. Santos partially blocks a huge head kick from Rakic. Santos lands a body kick soon after. Santos connects with a left while Rakic responds with a couple of leg kicks. Rakic lands a right while Santos connects with a body kick at the same time. Rakic continues to back Santos up. Santos misses a flying knee to end the first round.

Round 2: The round begins with Rakic backing Santos up against the cage. No fighter has yet to land a major strike as of yet as there continues to be plenty of feinting and blocked strikes. Santos blitzes forward but doesn’t land anything on Rakic who connects with an outside leg kick. They clinch up with Santos back up against the fence. They separate after not much action in the clinch. Both fighters continue to be very conservative. Rakic partially lands a flying knee as the round ends.

Round 3: Rakic starts to jab more. Santos lands a body kick. Santos goes for takedown soon after but Rakic defends and clinches him against the fence. They separate soon after as Santos lands a body kick. Santos connects with a leg kick. Santos connects with a hard body kick as he is having much more success this round. Rakic goes for a takedown but Santos is defending well while landing big elbows. They separate a bit after as this has largely been a very disappointing fight. Santos misses a spinning wheel kick as the fight ends.