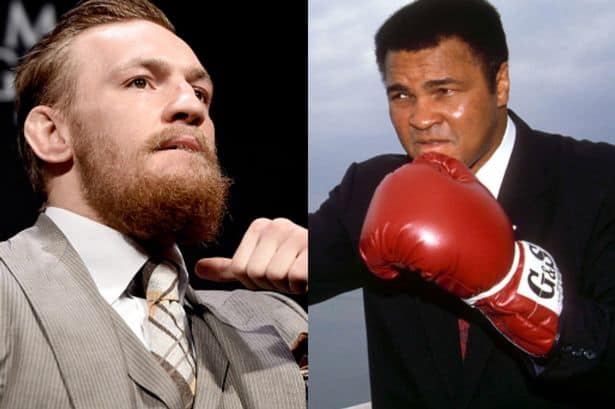 UFC interim champion the “Notorious” Conor McGregor has taken the sport of mixed martial arts (MMA) by storm in a relatively short amount of time.

In just a few years, he has become the face of the world’s largest promotion, a cash cow, a global superstar, and an icon.

Now, the Irish hype machine is just nine days away from the biggest fight of his life, as he’s set to take on reigning 145-pound boss Jose Aldo in the main event of December 12’s UFC 194 from Las Vegas in a bout that will unify the titles.

McGregor, although constantly proving himself inside of the Octagon, has made a name for himself due to his relentless and ruthless trash talk. Never afraid to say what he feels, the Irishman has found a knack for getting inside of the heads of his opponent.

This very trait has lead UFC president Dana White to make a bold comparison, comparing McGregor to a boxing and combat sports legend:

“””You don’t ever want to be that guy, especially when you’re a promoter, that’s comparing somebody to (Muhammad) Ali, you just don’t want to do that — but if you think throughout the history of the fight game the two guys that you’ve ever seen that were just absolutely world class at the mental warfare game it’s Muhammad Ali and Conor McGregor,” White said on the “Mike & Mike Show” on Thursday.

Comparing a fighter to Ali is quite a hefty claim, but White may have a point. Continuing on, the UFC boss said that he’s never seen anything close to how McGregor can virtually beat an opponent before even stepping into the cage:

“He is obviously a very aggressive guy, very intelligent and the best ever at the mental warfare game,” White said. “The beating he gives you before you even get in there to fight is second to none.”

Despite all of the hype and all of his recent successes, the “Notorious” one has never faced a fighter at the level of “Scarface”. Aldo has reigned over the UFC’s featherweight division for years now, defending his strap an impressive seven times.

While White noted McGregor’s role in the excitement surrounding the bout, he also reflected on the fact that Jose Aldo has been so dominant for so long:

Who will walk away as the undisputed king?