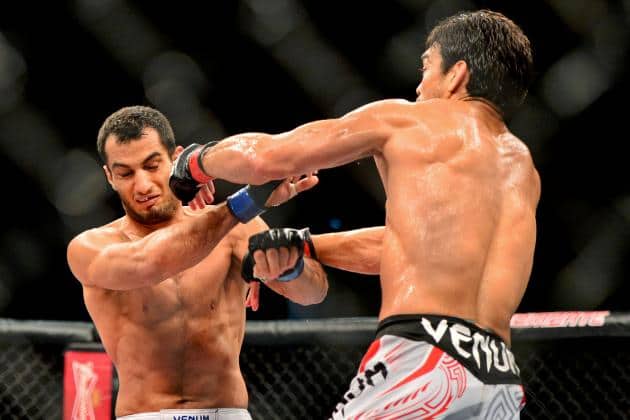 No. 9-ranked middleweight Gegard “The Dreamcatcher” Mousasi got back to his winning ways yesterday (February 27, 2016), scoring a dominant decision victory over Thales Leites in the co-main event of UFC Fight Night 84 from London, England.

Now back on track, Mousasi is undoubtedly eyeing some bigger fights in the foreseeable future.

Speaking on the matter with MMAFighting’s Ariel Helwani, “The Dreamcatcher” tossed out a few names, but one that specifically garnered attention.

Mousasi indicated that he would like a rematch with former light heavyweight champion Lyoto “The Dragon” Machida. Although he dropped a decision to “The Dragon” back in 2014, Mousasi claims that Machida cheated by greasing up and using steroids:

“””I would like to fight Michael Bisping, Vitor Belfort … Machida, when he’s not on steroids and he’s not greased up,” Mousasi said.“No, because it’s true. The guy was f—ing greased up, and he looked like a 15-year-old boy when I fought him. Obviously he was in Brazil. He was so f–king slippery.”

Some bold accusations to say the least, “The Dreamcatcher” admitted that he’s not alone with these remarks, once again naming Machida as a cheater:

“People now are surely going to say that I’m a bad loser, but the guy didn’t look normal for a f–king 38-year-old, and greased up all the way. He was greased up. Once he sweat, it was greasy. Even Luke Rockhold said that he was greased up when they fought.”

Do you agree with Mousasi here, and who would you like to see him square off with next?