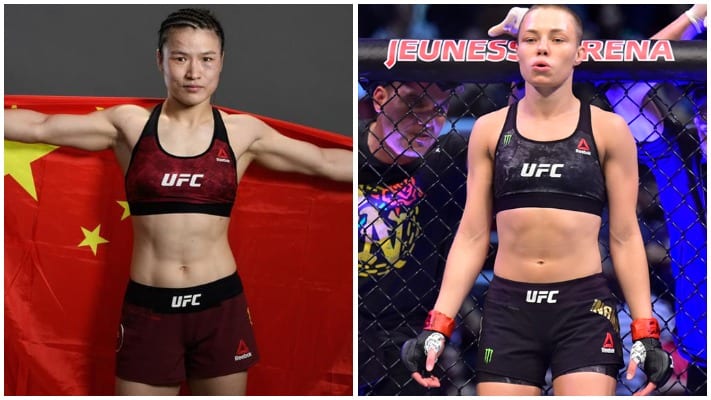 The fight fans have been waiting for!

UFC 261; a classic in the making. It will be a night where some of the world’s biggest and baddest women collide in the octagon. The main event will see UFC flyweight champion Valentina Shevchenko defend her belt against Jessica Andrade, and headlining the show is a fight that many fans have been waiting for. The fighting pride of China and first-ever Asian UFC champion Zhang Weili, against the former UFC Strawweight champ, Rose ‘Thug’ Namajunas.

The fight will go down on April 24th April starting at 3:15 PM PST in Las Vegas. Fans can tune into either ESPN or via UFC Fight Pass to watch this highly anticipated fight. The recent fight schedule is one that many UFC fans will be enjoying and with so many big fights happening, it’s an exciting moment to test your odds with UFC betting. So far this year we’ve already seen some excellent battles with the likes of Poirier vs. McGregor 2, Blachowicz vs. Adesanya, and we still have Miocic vs. Ngannou 2, and Whittaker vs. Costa, all happening before UFC 261 gets underway. There’s plenty of matchups where anything could happen in the coming months.

Tale of the Tape

Starting with the champion. Looking at her physique, she stands at 5′ 4″ and weighs in at 115 lbs, and is the shorter of the two. But that won’t have much effect thanks to her powerful striking style that is just as frighteningly quick. Zhang is the first UFC champion to come from Asia and her style is a true representation of her country that has a deep history of combat. She began her martial arts training with Shaolin Kung Fu, Sanda, and Shuai Jiao, and with striking being a large part of these disciplines, they have helped her build a reputation as a notorious striker after transitioning into MMA.

Zhang’s notoriety as one of the deadliest strikers is a result of her raw power, just look back at her last fight with Joanna Jędrzejczyk. When you’re witnessing one of the most powerful punchers in the sport, there’s alwaysgood odds that she’s going to knock her opponent out. Not only is she powerful, but she also has incredible control and knows when and how to throw. This is shown in her very good stats of 45% striking accuracy and 4.43 Significant Strikes APM. The fact that Zhang trains out of the Black Tiger Fight Club signifies that she is also very technically sound too.

On the flip side, there are definitely areas that could pose a threat to the defending champion. While she packs a punch, she’s actually very prone to receiving plenty of them too. She came out on top in her last bout but it was a crazy brawl, which is why it was namedfight of the year 2020. We’ve seen that she can be rocked and combined with her also being known to give indications of what she’s going to throw, the right fighter could strike gold.

This will be Zhang’s first fight since arguably one of the greatest fights in UFC history with Jędrzejczyk. She is undefeated in the UFC and has only one defeat coming in her pro debut back in 2013. But since then, she has had her hand raised in every single fight. But will she be victorious this time? We’ll have to wait and see.

For the challenger, she stands at 5’5″ and weighs in at 115 lbs, taking the height advantage in this championship bout. The former number 1 ranked strawweight is a specialist in Brazilian Jiu-Jitsu but also holds black belts in a number of disciplines.

Evident in her record and typically of Brazilian Jiu-Jitsu fighters, Namajunas possesses a strong ability to make her opponents tap with 5 of her 9 victories coming via submission. Nicknamed Thug Rose thanks to her aggressive style, this certainly has all the making to be another brawl as the striker meets the aggressor. Namajunas likes to lead and put pressure on her opponents with a series of jabs and kicks, before either going for a takedown or throwing a big kick. Namajunas is the younger of the two and at 28, she still has plenty more potential to succeed consideringall the strengths she has.

Although she is an aggressor, she tends to find herself in the middle of brawls. This is perhaps not the smartest way to go when faced with the likes of Zhang. She needs to be careful that she doesn’t leave herself exposed when losing position after submission attempts as a ground and pound from a power puncher like Zhang could get ugly.

Last time out, she got her revenge on Andrade who had beaten her prior. If theUFC rankings are anything to go by, she sits in 4th place behind her opponent. Overallher record is 9 wins and 4 losses, which is less favorable compared to Zhang and fewer fights, but she has more experience competing in the UFC which could speak to the level of competition she has come up against.

Overall, this has everything you’d look for in a UFC championship fight. These are two of the toughest athletes who are not shy of brawling and possess all kinds of technical ability from a range of martial art disciplines. You’d expect that if this fight stays on their feet, the power of Zhang may be too much for Namajunas, but if this goes to the ground, Namajunas may be able to take advantage of her superior skills and tap her opponent. One thing for sure is that this is going to be an action-packed event that could go either way, the question is, who are you picking to win?