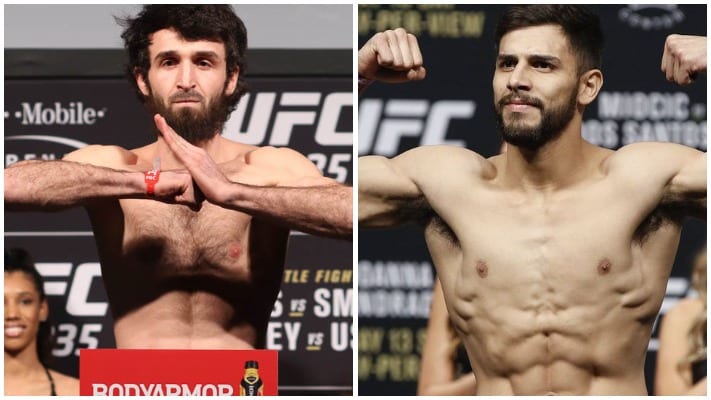 Zabit Magomedsharipov and Yair Rodriguez have been rebooked to fight at UFC 254. The featherweight contenders were originally set to clash on August 29 but Rodriguez withdrew from the fight due to an ankle injury.

According to Russian MMA reporter Igor Lazorin this eagerly anticipated 145lb match-up is being moved to UFC 254 which will be headlined by Khabib Nurmagomedov vs. Justin Gaethje on October 24. As it is no longer the main event fight Magomedsharipov and Rodriquez will no only go at it for three rounds instead of five.

Magomedsharipov is currently riding an impressive 14-fight win streak which stetches back to 2013. Since joining the UFC, the Russian has gone 6-0 inside the octagon. Last time out he picked up a unanimous decision win over fellow featherweight contender Calvin Kattar. Prior to that he also got another big win over Jeremy Stephens and pulled off the submission of the year against Brandon Davis.

Rodriguez beat Stephens in a rematch last time out at UFC Boston following a no-contest in their first fight due to accidental eye pokes. Before that, the Mexican scored a last-second KO over Korean Zombie in the main event of UFC Denver – it was one of the most dramatic finishes to a fight ever. The win over ‘Korean Zombie’ was his first since being dominated and stopped by former lightweight champion Frankie Edgar.

The winner of Magomedsharipov-Rodriguez could well be next in line for featherweight champion Alexander Volkanovski. The Australian defended his 145lb title against Max Holloway at UFC 251, picking up a decision win in controversial circumstances. He has since set his sights on finding a new challenger for his title and whoever wins at UFC 254 will likely be that guy.

Are you happy to hear Zabit Magomedsharipov and Yair Rodriguez have been rebooked for UFC 254 on October 24?