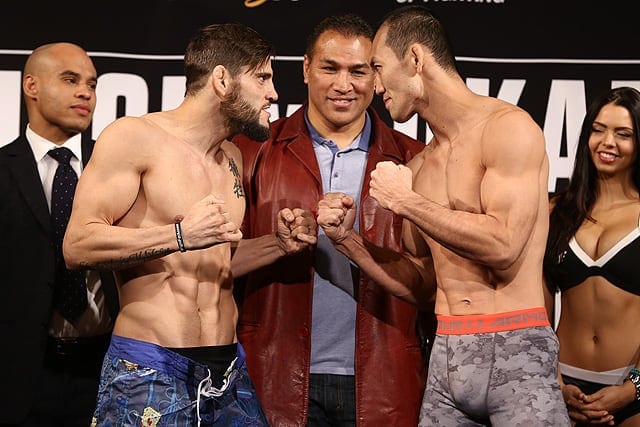 Tonight’s (Sat., October 17, 2015) World Series of Fighting (WSOF) 24 is in the books from the Foxwoods Resort Casino in Mashantucket, Connecticut.

The event featured a welterweight bout between former UFC title challengers Jon Fitch and Yushin Okami. Fitch used his trademark grinding style to notch a unanimous decision win over Okami, perhaps working his way back to a title shot at the vacant WSOF 170-pound title.

In the co-main event, Blagoy Ivanov faced Derrick Mehmen for the heavyweight title. The champion controlled much of the first round with several flurries of power shots, bloodying Mehmen. It was more damage from Ivanov in the second, as he wore down Mehmen before finishing the bout with a huge left hand late in the second.

Nick Newell battled Tom Marcellino at lightweight, winning a unanimous decision thanks to his grappling. Marcellino protested the decision, however, prompting Newell to tell him to be a good sport. Newell then retired from MMA, citing that it had become too hard and he was going to pass on what he had learned to younger fighters. The bout was also stopped early after the bell was rung with ten seconds left in the second round instead of the usual wooden blocks sounding.

Brazilian jiu-jitsu champ Vinny Magalhaes squared off against UFC vet Matt Hamill. Despite some early moments from “The Hammer,” Magalhaes got the fight to the mat as predicted, submitting Hamill with a first round kneebar.

Kicking off the main card, Magomed Bibulatov dominated Donavon Frelow en route to a 50-45 clean sweep on all the judges’ cards to earn the inaugural WSOF flyweight title.