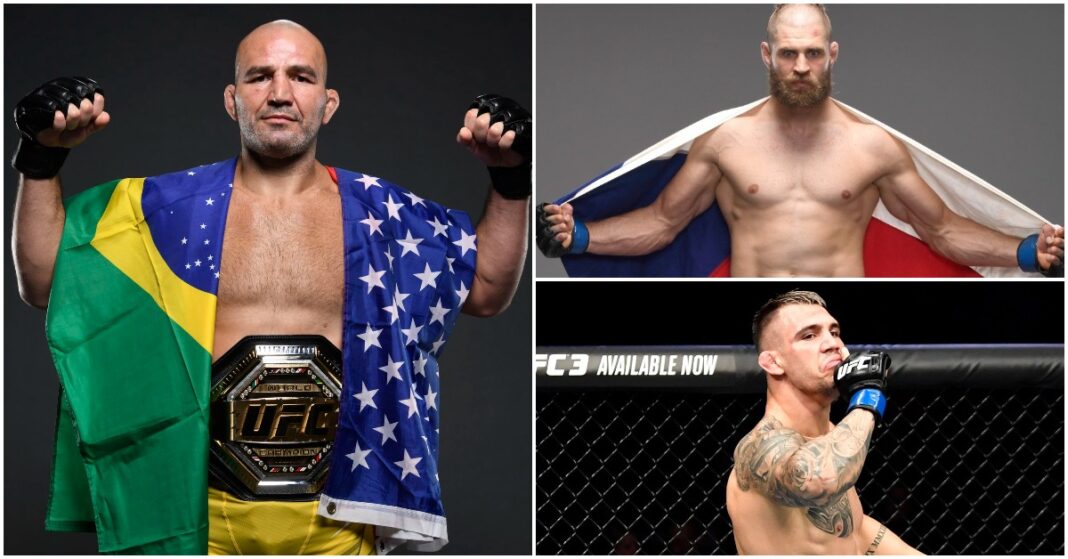 Things have got interesting at light-heavyweight ever since Jon Jones relinquished his title and announced his intention to compete at heavyweight. ‘Bones’ is yet to fight since then but in his absence, the 205lb division has been flourishing.

We’ve already had two new champions and in our opinion, the title could well change hands a couple more times before 2022 is done.

Join LowKickMMA as we take a look at all the key contenders at light-heavyweight and give you our pick for who’ll hold the 205lb strap come to the end of this year.

Glover Teixeira made history when he submitted Jan Blachowicz at UFC 267 to become the oldest first-time champion in company history.

The 42-year-old now faces the tough task of defending his belt against Jiri Prochazka at UFC 274 on May 7.

Teixeira will have the comfort of fighting in front of his fellow Brazilians but will not be the favourite heading into the fight.

We are done writing off Teixeira at this point. The guy is a savage and has proven that age is just a number during his five-fight win streak that ended with UFC gold.

Unfortunately, for Teixeira, the man who is favoured to hold the light-heavyweight title heading into 2023 is the man he faces next – Jiri Prochazka.

The Czech knockout artist is priced at 2.50 to be the 205lb champ at the end of this year and we totally get it after watching him tear through some of the best in his division.

Prochazka burst onto the scene with an epic KO win over the usually durable Volkan Oezdemir before following it up with an even more impressive KO win over Dominick Reyes.

The 29-year-old totally deserves his shot at the champ and will understandably enter the fight as favourite but we’re not sure he’ll be the light-heavyweight king come to the end of this year.

Aleksandar Rakic may not be as exciting or have as many fans as the two men competing for light-heavyweight gold at UFC 274, but he is just as, if not more, talented than them both.

The only blip on his otherwise perfect UFC record was a highly contentious split decision loss to Oezdemir. Since then, he’s easily dispatched of Anthony Smith and Thiago Santos.

We believe that he will get by Jan Blachowicz on March 26 and establish himself as the number one contender.

He’ll then face the winner of the Teixeira vs. Prochazka and beat whoever is holding the belt.

Lucky for us, he’s priced at 5.50 to be the UFC light-heavyweight champion come to the end of 2022. They are really good odds we’ll definitely be taking up.

There are a few other guys at 205lbs who have the ability to be champion, but we think will ultimately fail to make it happen this year.

Magomed Ankalaev has future champ written all over him but we just don’t think 2022 is the year he’ll make it happen. This time next year he’ll certainly be in the conversation for a title shot and we wouldn’t be too surprised to see him hold UFC gold in 2023.

Jan Blachowicz is only one or two wins away from another title shot but we just can’t see him beating Rakic or any other top guy right now. The former champ looked terrible when losing the title to Teixeira and we fear his days as an elite light-heavyweight may be over. If you disagree, he’s priced at 7.00 to hold UFC gold by the end of 2022.

If you really want to back a long shot take a look at Anthony Smith at 34.00. ‘Lionheart’ has done a great job of rebuilding himself after suffering back-to-back losses. A couple more wins and he could well be in the title picture and we certainly wouldn’t back against becoming champ if he gets another UFC title shot.

Who do you think will be the UFC light-heavyweight champion at the end of 2022?