LowKickMMA.com
Home MMA News Where Do Vitor Belfort & Dan Henderson Go With A Win In... 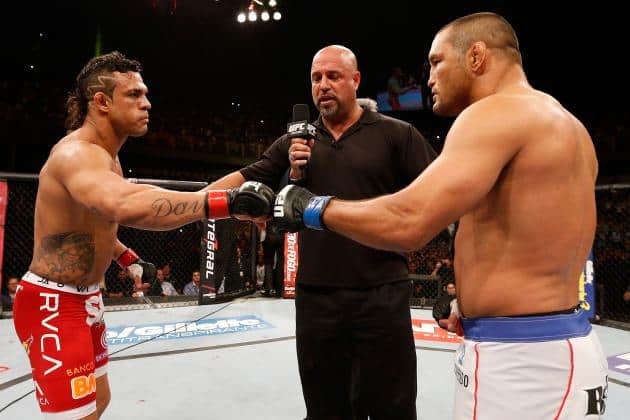 It’s an off weekend for the UFC, but the promotion will be back next week as UFC Fight Night 77 is set to go down on November 7, 2015 live from Sao Paolo, Brazil presented on FOX Sports 1.

The main event features a trilogy bout, a rubber match so to say, between two mixed martial arts (MMA) legends and pioneers as No. 4-ranked middleweight Vitor “The Phenom” Belfort takes on No. 12-ranked Dan “Hendo” Henderson.

Both men are clearly past their primes, as Belfort currently sits at 38 years of age, while Henderson is 45 years old. That being said, both are at interesting points in their respective careers which poses an intriguing question.

Where does each man go with a win in Brazil?

Let’s start with “The Phenom”. Belfort spent nearly a year and a half on the sidelines before his most recent fight, a first-round stoppage at the hands of current champion Chris Weidman last May. However, the Brazilian still sits near the top of the division.

On the flip side, a win over Henderson doesn’t do much for Belfort in terms of rising up the ladder or gaining another title shot. That doesn’t mean there aren’t any interesting fights left for “The Phenom”, however.

If indeed victorious, the UFC could set up a battle between two of the best Brazilian strikers of all-time by pairing off Belfort with No. 5-ranked Lyoto “The Dragon” Machida. Machida is currently riding one of the worst stretches of his career after dropping two-straight brutal losses to Luke Rockhold, and Yoel Romero, but a matchup between “The Phenom”, and “The Dragon” would still be quite an exciting one, and one that would make quite a bit of sense.

Another interesting option for Belfort would be a scrap with No. 6-ranked Tim Kennedy. Kennedy has been out of action since he suffered an extremely controversial loss to Romero last September. However, he has expressed interest in returning soon and could be a suitable opponent for Belfort.

Now let’s move on to Henderson. At this point in his career, it’s hard to see the former Olympian getting anywhere near the top of the division, but beating the No. 4-ranked fighter wouldn’t hurt either. Having only won two out of his last seven fights, “Hendo” will be looking to extend his winning streak and if he does, he could be in for a top-10 opponent.

Perhaps Brazilian Thales Leites would work. Leites is coming off of a decision loss to Michael Bisping last July, but prior to that he had won five-straight. The Brazilian is a well-rounded, powerful fighter who could provide a test to see where Henderson is at.

Another possible option would be No. 8-ranked Gegard “The Dreamcatcher” Mousasi. Henderson, and Mousasi actually faced off last January in a fight where Mousasi scored a quick finish that “Hendo” wasn’t too happy with.

“The Dreamcatcher” has since went 1-1 and is coming off of a loss, but would still be a top-10 ranked fighter for Henderson in a bout that could make sense for both men.

Who do you see coming out victorious in Brazil, and what should be next for that said fighter?