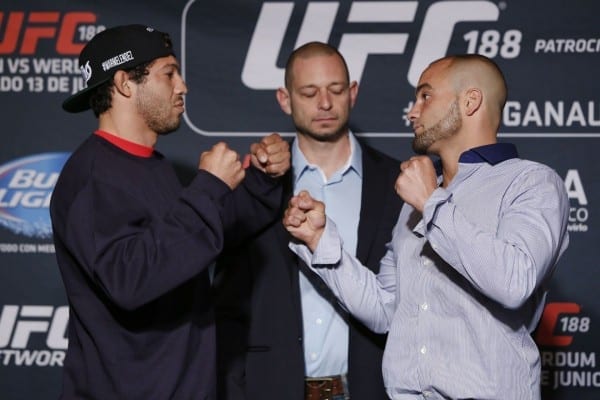 Last night’s (Sat., June 13, 2015) UFC 188 event from Mexico City featured a highly anticipated fight between Gilbert Melendez and Eddie Alvarez. Both fighters are known for their willingness to put it on the line, so the co-main event of UFC 188 was a fight that, on paper, could not disappoint.

While it may not have lived up to its high expectations, it was a fun fight that saw Alvarez walk away with a somewhat controversial split decision victory. Two out of three judges scored the contest 29-28 for Alvarez with the third and final round being the deciding factor. Alvarez and Melendez now have very different roads ahead of them, and both will not be easy. Let’s take a look at where the two 155-pound rivals may be headed.

What’s next for Eddie Alvarez?

With a victory on Saturday, Eddie Alvarez secured his first UFC win and now has poised himself to begin a legitimate run for the title. His only fights in the UFC came against the next lightweight title challenger in Donald Cerrone and Melendez, who has fought for the lightweight title twice since joining the organization. The road ahead won’t appear to be any easier as potential match-ups loom with “Ragin” Al Iaquinta and Tony Ferguson. If they both prove to be successful in their next bouts (both on UFC Fight Night 72: Mir vs.Duffee on July 15), they will both be on large win streaks against quality opponents.

With timing also being a factor, a bout against one of these opponents could make the most sense and could also determine who the next title challenger is. Someone also not to rule out either as a potential opponent is the undefeated Khabib Nurmagomedov. With injuries keeping him on the sidelines, the UFC may want to pit him against a top contender like Alvarez to determine who will fight for the title next.

What’s next for Gilbert Melendez?

Gilbert Melendez has been in some great fights since joining the UFC in 2013. Unfortunately for the San Francisco native, he has fallen on the wrong end of some controversial decisions, leaving him at 1-3 overall in the organization. Despite these tough breaks on the scorecards, he is on a two-fight losing streak and not getting any younger.

Melendez will likely have to put together a 4-5 fight win streak to get  another title shot, which makes his next matchup the most important of his career. With Myles Jury having been recently scrapped from his scheduled UFC on FOX 16 bout, the UFC could rethink their strategy and have one face off with Melendez. Michael Chiesa is coming off of a win in April and the former The Ultimate Fighter (TUF) winner would make for a great matchup for Melendez, with ‘El Nino’ being the biggest name opponent of his career.

One last dark horse for Melendez would be a fourth installment in his already storied history with Josh Thomson. They had a legendary trilogy in the now defunct Strikeforce, so don’t be surprised if Thomson wins against Tony Ferguson to set the two up to face off for the first time under the UFC banner.