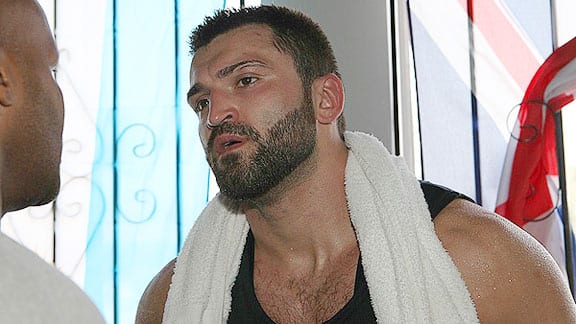 It’s not often that I spend too much time watching these types of videos, but this UFC Fight Night 51 open workout is hilarious. Heavyweights Andrei Arlovski and Antonio “Bigfoot” Silva will square off tomorrow, and “The Pitbull” can be seen in a very unique open workout for the fans in Brasilia in the above video

I’m not quite sure who Andrei Arlovski believes he is fighting tomorrow, but judging by his open workout-it’s not Antonio Silva. It looks like the ex UFC champion has brought along the bantamweight version of Jimi Manuwa along as a sparring partner, and the outcome is both side-splitting comedy, mixed with a dash of WTF.

He will need to be a little more serious on fight night, as “Bigfoot” already holds a 2010 Strikeforce win over the Belarusian. The decision loss for Arlovski came during a four-fight skid that saw him finished by Sergei Kharitonov, Fedor Emelianenko and Brett Rogers. In quite the reversal of fortunes, “The Pitbull” has only tasted one defeat since 2011.

With talk of a weak chin seemingly behind him, Arlovski has gone three rounds with guys like Brendan Schaub and Anthony Johnson; both known for having very heavy hands. Perhaps his past troubles have been more a mental block than a physical weakness. Whatever the case, “The Pitbull” and “Bigfoot” have unfinished business, so stay tuned to LowKick for more pre-fight hype, coverage and more ahead of UFC Fight Night 51: Bigfoot vs Arlovski 2.