LowKickMMA.com
Home UFC News Volkan Oezdemir Believes Training With Khamzat Chimaev Will Be His Key To... 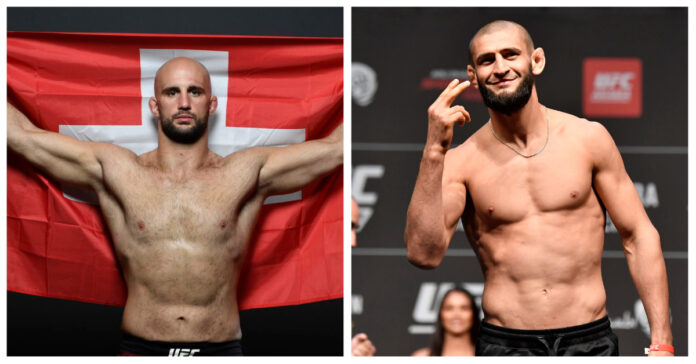 In a recent interview with MMA Junkie’s Farah Hannoun, Volkan Oezdemir (17-6) revealed that he has moved his training camp to the famed All Star Gym in Sweden, which is known for harboring stars such as Alexander Gustafsson and, more recently, Khamzat Chimaev. Speaking on the matter, Oezdemir stated that:

“It’s now my full time location. I’m really happy to be there… My previous fight in Abu Dhabi, I was in the same locker room as Khamzat and we spent a little bit of the fight week together. The manager and the coach were talking, and they invited me over there. So because of what happened in my fight, I decided it was time for a change. With this happening at the same time, it was the perfect opportunity for me to grab it.”

After His Recent Loss, Volkan Oezdemir Decided “It Was Time For A Change”

A part of this change was spending more time working on his takedown defense, as Paul Craig is known for his grappling ability, specifically his dangerous submission game. And perhaps there is no one better in MMA at the moment to train grappling with than Khamzat Chimaev, who burst onto the MMA scene 2 years ago largely thanks to his incredibly dominant wrestling game.

Meanwhile, Paul Craig (16-4), will look to extend his winning to six as he takes on Volkan Oezdemir this weekend at UFC Fight Night: Blaydes vs. Aspinall. Craig has displayed an amazing ground game recently, which Oezdemir will hope to nullify after all those grueling wrestling sessions with Chimaev.

Oezdemir will look to get back into the win column on Saturday night as he is currently on a two-fight losing steak, having only fought once in the previous two years. Oezdemir himself had quite the explosive entrance into the UFC like his new teammate Chimaev, where he won multiple fights via a KO in less than a minute, earning him the nickname ‘No Time’.

Since then, Oezdemir has had an up-and-down career, despite earning a UFC title shot, and it seems like, with the recent camp change, he’ll be hoping to reignite the earlier spark and get another trademark KO finish, which had made him so popular with the fanbase.