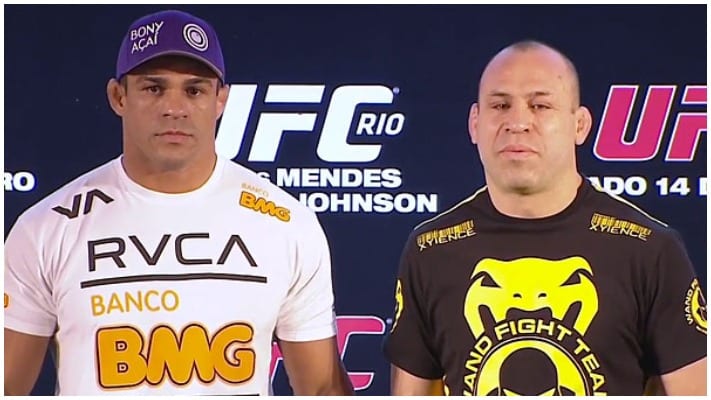 Wanderlei Silva sent MMA fans into a frenzy late last night when he took to Instagram, in a now-deleted post, that teased several intriguing matchups at an event called Fight Club After Dark. The poster says the event will take place on November 21 at the Tyson Ranch, with the tagline, “Experience live MMA like never before under the stars on the Tyson Ranch.”

In the poster Silva is teasing Tito Ortiz vs. Rashad Evans in a trilogy fight and Fedor Emelianenko and Fabricio Werdum’s rematch. He also says he will be fighting Vitor Belfort on the card with two high-profile unnamed undercard fights on the event.

Belfort has now taken to social media himself to advise his compatriot to stop posting fake news and begin negotiations, he wrote.

“I’ll give you an advice, stop posting and start negotiating. Your request has been accepted. Stop posting fake news posters and let’s get it done.”

In a minute-long video Belfort tells Silva and his team to contact the ONE Championship CEO Chatri Sityodtong to negotiate the fight.

“My team, my manager have already called (Silva), and Chatri from ONE Championship said that this fight will happen,” Belfort said in Portuguese. “It’s only up to (Silva) now. He has to start negotiating with (ONE). He has to start moving for this fight to happen. There’s no other way.

“He wants this fight, so let me give you some advice Wanderlei, get in touch with (ONE) and dedicate, brother. I’m waiting for you. Stop posting fake news and little posters and let’s fight. I’ve already accepted, you have to start moving now.”

Do you want to see Vitor Belfort fight Wanderlei Silva?