While former UFC star Vitor Belfort has a lot of respect for his upcoming boxing opponent, Oscar De La Hoya, he’s warning the public that he may accidentally inflict fatal damage on the boxing legend when they go to war in the ring next month in Los Angeles.

Belfort enters the bout in his first boxing match since making the full commitment to transition from MMA to boxing during this latter stage of his career. He competed in a boxing match in the mid-2000s against Josemario Neves, earning the knockout win.

After a long tenure in MMA that included runs in the UFC, PRIDE, and an attempted run in ONE Championship that never materialized, Belfort is full-steam ahead when it comes to his boxing career as he gets ready for a professional boxing fight against one of the best ever in De La Hoya.

Belfort is training hard for his opportunity to beat De La Hoya, and he’s in some ways worried about the damage he may inflict on the boxing Hall of Famer.

“Oscar De La Hoya is a true superstar in the boxing world and one of the greatest and most popular fighters of our time,” Belfort said in a recent interview with World Boxing News. “While we both have a great deal of respect for each other’s accomplishments, on September 11, I will make my MMA fans proud. I’ll show that MMA and ex-UFC fighters can take down even the best boxer in the world.”

READ MORE:  Israel Adesanya Sleeps Through Namajunas-Esparza 2 At UFC 274: "I Was Blinking Slowly"

“I hope I don’t end up killing him. But everything is on the table. This is a no holds barred, all-out gladiator fight to the bitter end.”

Belfort is a slight-betting favorite heading into his boxing match with De La Hoya, who hasn’t competed in the ring since he lost to Manny Pacquiao back in 2006. These latest comments will surely add fuel to the fire ahead of the Sept. 11 fight.

What is your prediction for Oscar De La Hoya vs. Vitor Belfort? 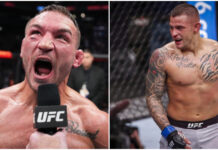 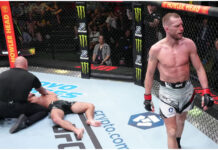