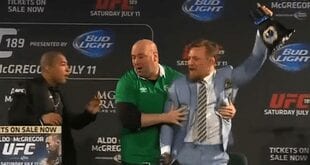 In a sequence of events that should surprise absolutely no one, things got a bit testy at today’s (Tues., March 31, 2015) final stop on the UFC 189 World Championship Tour in Dublin.

Brash Irish superstar and future featherweight title contender Conor McGregor spent the vast majority of the presser playing to his passionate (and perhaps inebriated) fans, while longtime champion Jose Aldo stayed quiet as he absorbed a ton of abuse from the Irish faithful, who even went as far as to call the seven-time defending champion a ‘p—y.’

Aldo has been made to swallow his pride and take an endless amount of insults from brash master of promotion McGregor, and he’s done so with the utmost class of a true champion.

However, he seemingly reached his wits’ end when McGregor snatched up his belt at the end of today’s presser, taking offense and cocking his fist back ready to hit McGregor. Have a look at the scene via UFC Brasil:

Kudos to them for supporting their man, but overall it’s tough to accuse an MMA legend like Aldo of being anything close to the term. Yet it’s clear that McGregor shares the sentiment of his fans, if only for the sake of self-promotion. “Notorious” said that it wouldn’t take long to dispatch of Aldo, predicting a first round finish when the two finally square off at UFC 189:

“One round it will be done. Mark my words. I feel a left hand down the pipe will break him.”

Questioned about a rematch with Aldo if and when he obtains the belt, McGregor said that how he beats Aldo would not leave any of the doubt required for a rematch:

“Rematches happen in this game. But the manner in which I beat him, there will be no need for a rematch.”

Should McGregor win the belt and become the massive megastar the UFC has pegged him as, his fans obviously want his next fight to be in Dublin soccer stadium Croke Park. UFC President Dana White promised them that much if he could bypass all of the red tape necessary:

“I promise you all here today if we can get through all of the ordinance stuff with Croke Park, we’ll do Croke Park.”

The stage is set for quite possibly the biggest fight in UFC history, and endless credit has to be given to Aldo for maintaining close to flawless poise in the face of much disrespect. Will he channel that rage into a big win over “Notorious” in July, or is McGregor in his head after the tour?