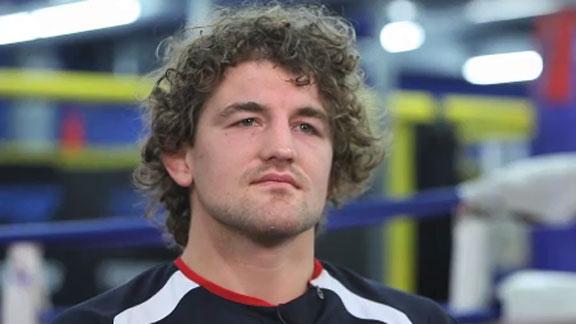 Last night (Fri., September 5, 2014) while Bellator 123 and UFC Fight Night 50 were both going down in Connecticut, an MMA fight of a different kind was going down on the set of AXS TV’s Inside MMA.

In it, OneFC welterweight champion Ben Askren was debating whether or not he would actually have to go to the UFC eventually to fight the best welterweights in the world. “Funky” agree that the UFC had the best talent in creating a monopoly-like situation, but he said that it was also ludicrous to insinuate that fighters couldn’t go elsewhere to make more money while being treated better.

Apparently this riled the blood of show host Kenny Rice, who cut Askren off in a seemingly rude manner for a television host. Here’s the video courtesy of AXS TV in case you missed it:

Interesting. Askren may have voiced his strong opinion about the UFC, but he’s in the media on an almost daily basis doing just that. To have the former NCAA wrestling champion on to the show knowing full well what he was going to say and then cut him off is just a strange way to conduct business.

And Askren was understandably offended, taking to Twitter to challenge Rice to a debate on MMA economics:

Askren may be a master of MMA economics, because he reportedly makes quite a tidy sum to clean up OneFC’s welterweight division. UFC President Dana White recently said he’d be wiling to give Askren, who was let go as Bellator champion for his “boring” fighting style, a chance now that he’s finished four straight opponents.

Yet it appears that Askren doesn’t want that chance. Did he make the right choice in forging his own path, or will never taking on the best in the Octagon come back to haunt him?