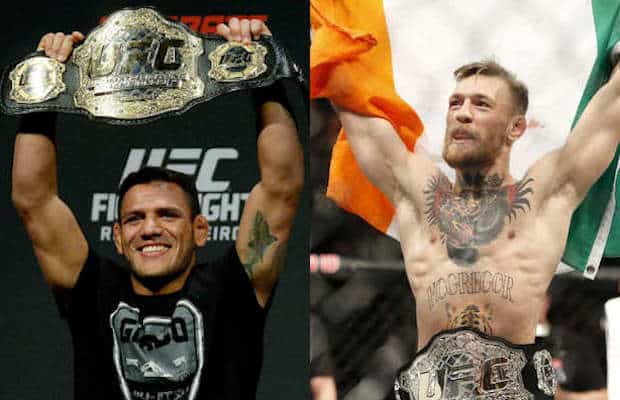 The most anticipated event of the year is fast approaching as UFC 196 is set to take place on March 5, 2016 from the MGM Grand Garden Arena in Las Vegas, Nevada live on pay-per-view (PPV).

The main event will feature a sure super fight, as reigning featherweight champion the “Notorious” Conor McGregor is set to take on defending 155-pound title holder Rafael dos Anjos.

McGregor has rose to superstardom over the last few years since entering the promotion, winning all seven of his UFC bouts with an impressive six finishes. The Irishman is coming off of a shocking 13-second knockout of former long-time champion Jose Aldo last December.

Dos Anjos on the other hand, has run a demolition course through the lightweight division, establishing himself as a true champion. The Brazilian has compiled five straight victories including wins over former champions Benson Henderson and Anthony Pettis, and top contenders Nate Diaz and Donald Cerrone.

The excitement doesn’t end there, however, as a second title will be on the line in the co-main event of the evening.

“The Preacher’s Daughter”, a multi-time world boxing champion, is coming off of one of the biggest upsets in sport history when she knocked previously dominant champion Ronda Rousey out cold last November.

Tate has won four straight since losing to Rousey and is coming off of a victory over Jessica Eye last July.

Take a deeper look into the training camps of these four fighters with the UFC 196 Extended Preview below courtesy of the UFC: