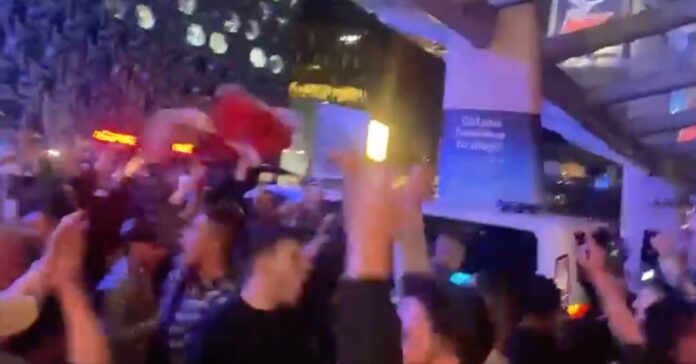 Landing the Octagon in the capital for the first time since March 2019 amid the ongoing COVID-19 pandemic, the UFC hosted a ‘Fight Night’ billed event – featuring a slew of former Cage Warriors talent and past promotional champions, including the likes of the aforenoted, Aspinall, Paddy Pimblett, and Molly McCann.

The victory ended the night for the UK contingent who emerged with seven triumphs throughout the night from 12 total bouts from top to bottom.

Following the event, footage emerged, captured by Aspinall’s close friend of 25 years, Alex Killey – with throngs of fans gathering outside The O2 Arena – with fans chanting “Tommy Aspinall, Aspinall, Tommy Aspinall” to the tune of Baby Give It Up by KC and The Sunshine Band.

Amongst the victories for the hometown contingent, the aforenoted, Pimblett landed a rear-naked choke win over Kazula Vargas, while McCann stopped Luana Carolina with a Knockout of the Year spinning back elbow in a third round exchange.

On the preliminary card, the likes of Paul Craig, Jack Shore, and Muhammad Mokaev also landed victories for the UK, while surging featherweight contender, Arnold Allen scored the biggest win of his professional career to date with a first round knockout win over Dan Hooker in the night’s second to last outing.