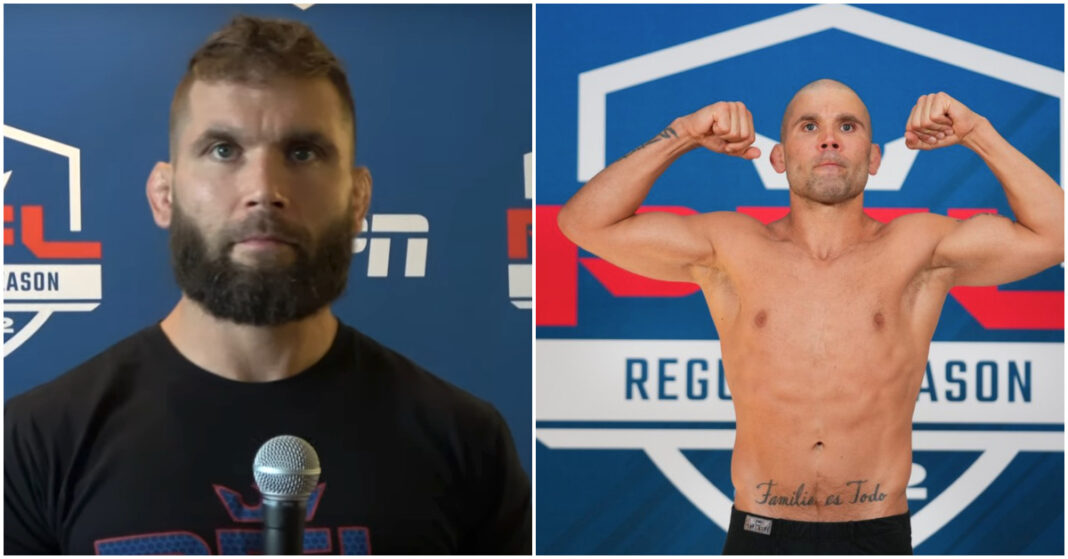 UFC veteran Jeremy Stephens is slated to take on Myles Price in a lightweight bout this Friday at PFL 4. He was going into the contest with a full beard and hair on his head but things took a bizarre turn when ‘Lil Heathen’ struggled to make the weight limit.

During the official weigh-ins for the upcoming PFL event in Atlanta, Stephens came in over the limit and was allowed time to shed off the remaining few pounds. With less than 10 minutes left to reach the division limit, Stephens took to the scale as the last fighter and looked very different than his initial try.

In a bid to make weight and retain 100 percent of his point tally, Jeremy Stephens brought out the razor to shave off his head and beard. The trick seemed to have worked for the 36-year-old Iowa native who needed to use a towel as he stripped down for his final attempt.

Stephens came in at 156-lbs making him eligible for the lightweight contest. Although title fights follow a rigid compliance to the divisional limit of 155 lbs, non-title fights are allowed a one-pound allowance.

PFL shared an image of Stephen sporting his new look on Twitter.

Stephens’ past struggles with weight

Having started his professional career in 2005, Jeremy Stephens made his way into the UFC in 2007 with an unsuccessful debut against Din Thomas. Towards the end of his run in the promotion, Stephens dropped five out of his last six with one being ruled a no contest. In January, he was let go after a nearly 15-year tenure that saw him compete in 33 fights under the banner.

Although he never missed weight when competing in the lightweight division, Stephens has had issues making weight at featherweight. He came in more than five pounds overweight at 150.5 lbs for his outing with Calvin Kattar at UFC 249 and also missed the mark by nearly five pounds against Dennis Bermudez, coming in at 149.5 lbs at UFC 189.

His first showing under PFL did not go his way as Clay Collard managed to secure a win by unanimous decision. Stephens will be looking to get back to winning ways after sacrificing his hair for the upcoming fight with Myles Price at PFL 4.