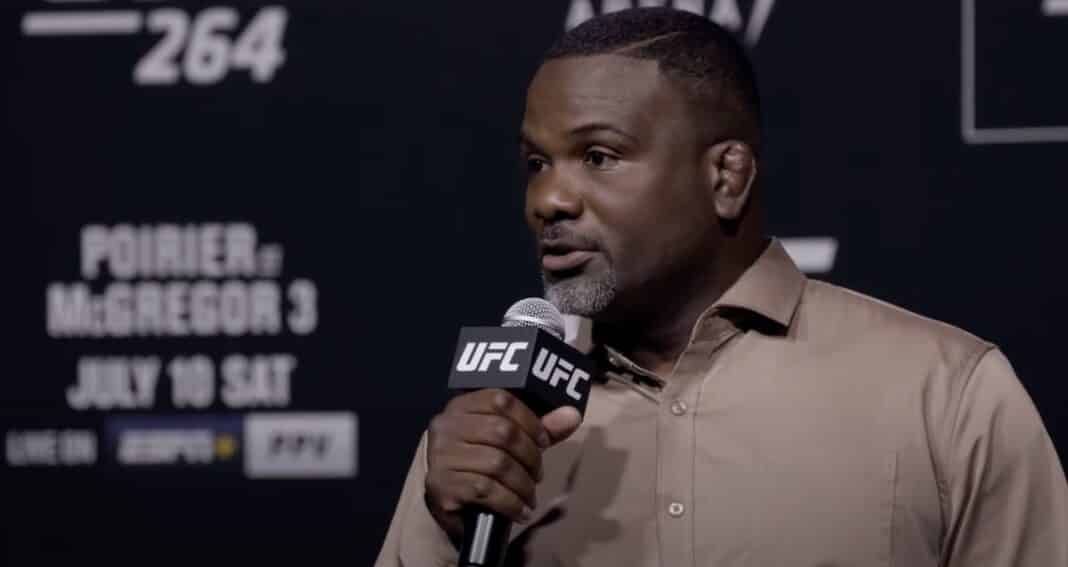 Din Thomas is a Delaware native that moved to Port St. Lucie, Florida when he was 12 years old. Growing up, Thomas never really had any interests in playing any sports.

During his senior year of high school, Thomas would have a bad breakup with his high school girlfriend. This led to Thomas assaulting his ex’s new boyfriend and being arrested for battery.

He would spend every weekend of that year at prison to serve his time.

After serving his time, Din Thomas found a Jiu Jitsu school in his hometown. Din would quickly gain interest in training and showed potential as a future fighter.

Din Thomas’ Jiu Jitsu ability would lead him to a 5-0 start to his MMA career. All of which were finishes with 4 submissions and 1 TKO.

Future UFC vet Caol Uno would give Thomas his first defeat at a Shooto event in Japan. After this loss, Din would bounce back and boost his record to an impressive 12-1.

Starting his career at 12-1 would get Din his first run in the UFC. Unfortunately he would lose his debut by 1st round TKO to future UFC legend BJ Penn.

Thomas would bounce back to win his second UFC fight against Fabiano Iha . Then he would win 2 more fights on smaller promotions before returning to the UFC losing again to Caol Uno.

Although he would bounce back again and beat Matt Serra to end his first UFC run. After this match, Din Thomas would fight on various promotions going 4-3 in 7 fights.

In 2006, Din would appear on the 4th season of the Ultimate Fighter series dubbed “The Comeback.” This season on TUF spotlighted ex UFC fighters competing for a welterweight title shot.

In the first round, Din Thomas would face Mikey Burnett and put Burnett out with a triangle choke. Thomas would then lose a close decision in the semis against Chris Lytle.

Din Thomas was brought back to fight on the TUF 4 finals undercard against another contestant Rich Clementi. A fight he would win by RNC in the second round.

Around this time, the UFC had brought back the lightweight division. This would give Thomas his second shot in the promotion.

Din would come back to the lightweight division and win a decision and FOTN honors against Clay Guida. Then he would win his third straight UFC fight before losing to top ranked lightweight Kenny Florian by RNC.

Din Thomas would then lose his second straight fight to Josh Neer. Ending his last run in the UFC.

After his last UFC fight, Din Thomas would have his last 4 fights on smaller MMA promotions. Going 3-1 and 1 no contests during this stretch.

Thomas was supposed to fight ex boxing champion Ricardo Mayorga. Unfortunately this fight was cancelled due to a judge passing an injunction complaint sent in by boxing promoter Don King.

Then in 2014, Din Thomas would announce his retirement from MMA. Ending his career with a record of 26-9 with 1 no contest.

When Din Thomas retired, he turned his time to becoming a full time MMA coach. This actually wasn’t Thomas’ first time as an MMA coach.

He had actually been a part time coach for the better part of 15 years. Starting out as a Jiu Jitsu coach at Internal Power Karate School in 1999.

Throughout his fighting career, Thomas would own multiple MMA and Jiu Jitsu schools. Most of which were small affiliates of American Top Team.

Din Thomas was a fixture in small MMA events throughout the southern states. Coaching numerous amateur fighters and also up and coming pros.

After retiring from MMA, Din Thomas would become a full time coach at his longtime gym, American Top Team in 2015.  He would work with some of the world’s best fighters during his 5 years at the gym.

His most known fighter was former UFC welterweight champion Tyron Woodley. Din was with Woodley during his rise to stardom to the end of his career.

Then after a combined 2 decades with ATT, Din Thomas stepped down as a coach in 2020. His new goal is to open his own MMA and Jiu Jitsu school.

Din Thomas has helped train a who’s who of top MMA fighters. Most notably Tyron Woodley and to a much lesser extent Amanda Nunes.

By far Din Thomas’ most known fighter is former UFC welterweight champion Tyron Woodley. When Woodley came to ATT, Thomas quickly took him under his wing.

Before fighting, Woodley grew up in Missouri and was a state champion wrestler in high school. After high school, he attended Missouri University and was a 2x All-American there before graduating.

Woodley would then make the natural transition to MMA, where he would excel. He would make his Strikeforce debut after just two fights and be with the company until Zuffa bought them in 2012.

During his time in Strikeforce, Woodley would go 7-1. Only losing his last fight against UFC vet Nate Marquardt for the title.

Then with Strikeforce being bought, Tyron would enter the UFC. He would be successful in his debut knocking out Jay Hiero in the first round.

Tyron would lose a controversial split decision in his 2nd UFC bout with Jake Shields, but win his next 2 fights. One of which was against former interim welterweight champion Carlos Condit.

In his next fight, Tyron would lose a tough decision before going on the run of his career. Winning 3 straight which included winning the UFC welterweight title with a KO over Robbie Lawler.

Woodley would then have three title defenses with two fights against Stephen Thompson and one with Demian Maia. He was highly criticized in these fights for the lack of action and was billed as a boring champion.

Although he would hush critics in his last successful title defense. Submitting Darren Till and earning his BJJ black belt from Din Thomas after the fight.

Unfortunately Tyron’s career would start to have a down turn after this fight. He would lose his title to Kamaru Usman and then lose his next 4 fights.

This would lead to his release and setting up a boxing match with Jake Paul, which he lose by split decision.

By far the most successful fighter that Din Thomas worked with was the female GOAT of MMA Amanda Nunes. She would come into the UFC with a 7-3 record and was considered a good fighter, but not a great fighter.

Nunes would win her first 2 UFC fights, which included her first win over Germaine de Randamie. In her 3rd UFC fight, she suffered the worst loss of her career to Cat Zingano. This would also be her last loss to date.

Amanda would go on a tear winning her next 3 fights to set up a title fight with Miesha Tate. A fight that dominated from start to finish, winning by TKO and earning the bantamweight title.

Her next fight would be against Ronda Rousey and would end the fight in devastating fashion. Breaking the former champ’s jaw and ending her career.

She would defend her title 3 times before facing the then most feared fight in women’s MMA, Cris Cyborg. The world would be shocked as Nunes knocked out Cyborg in under a minute of the first round.

Winning the women’s featherweight title and becoming the GOAT of women’s MMA. Since then Nunes has continued winning and now holds a record of 21-4.

The legacy of Din Thomas

Din Thomas has done it all in the sport of MMA. He was an accomplished MMA fighter with 9 fights in the UFC before becoming a full time coach.

Then he became an even better coach, than he was a fighter. Helping multiple world champions train for titles and numerous other fighters during his career.

On top of being coach, Thomas has been a frequent special guest on Dana White’ Lookin For A Fight Series.

As of 2020, Din Thomas left his long time gym ATT to go out and open his own gym. At 45, Thomas has plenty of years to add to his legacy in the fight game as an MMA coach.