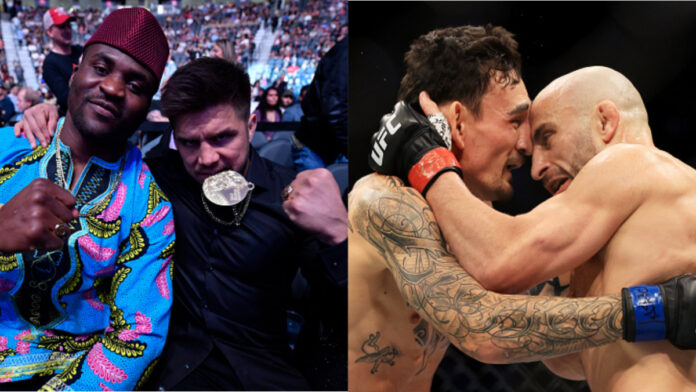 After a dominant victory over Max Holloway at UFC 276, Alexander Volkanovski came face to face with a former two-division champion: Henry Cejudo.

Volkanovski and Holloway battled it out in their third fight together. The first two fights were considered controversial, and after ‘Blessed’ quickly defeated a few other top contenders, a trilogy fight seemed only natural.

The first round started off as close as the fight would ever be. ‘The Great’ was truly in the zone, and his movement and standup came together to form a beautiful display of the evolution of striking, against one of the greatest strikers the division has ever seen in Holloway.

Sadly, every round thereafter would be a brutal display of Volkanovski’s talent. He made ‘Blessed’ seem like he was a step behind, and never let the Hawaiian find the flow-state he’s so known for slipping into and destroying opponents with.

The fight would reach a decision, and there was a clear winner. Alexander Volkanovski officially closed the Holloway chapter in his career with a dominant victory, and he didn’t go long until he would find another seemingly-worthy challenger.

“This is all competition, man,” Henry Cejudo said on the video. “If an Olympic medal and two UFC belts ain’t enough, I just want to compete, Alexander. As a competitor, I respect the sh*t out of you. Congratulations No. 1. I just want to know how far I can take it. I’m here. I’m here.”

While the response of Volkanovski isn’t 100% clear, it does sound like he said: “Well, I’m gonna keep it real…I’m in need of somebody else (to defend the belt against), let’s do it.”

Alexander Volkanovski has now defended his title a total of four times. It’s unclear if the UFC will let Volkanovski defend his title against Henry Cejudo, however, they do have a track record of usually letting champions hand-pick their opponents.

Does Henry Cejudo deserve a title shot, or should Alexander Volkanovski defend the belt against somebody else?