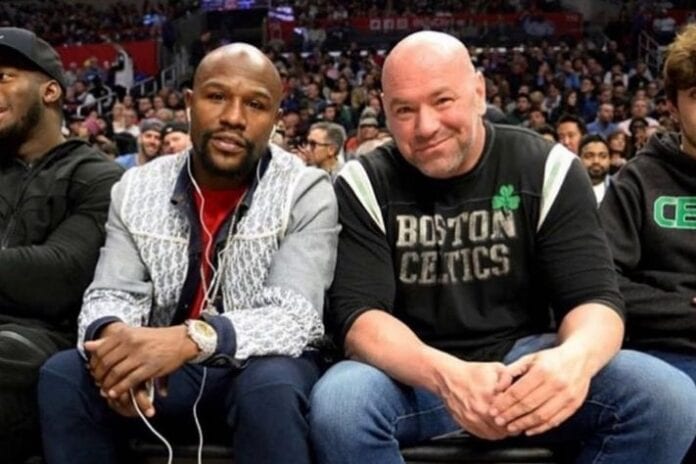 After a widely successful event revolving around Conor McGregor and Floyd Mayweather. It should come as no surprise that White and Floyd are in talks to hold another combat sports event. The bout held on August 26th 2017 raked in a total 4.3 million ppv buys recording the second highest pay-per-view buy rate in history. Mayweather has expressed interest in a rematch with McGregor. Unfortunately not in MMA like we all want, but he’s fine with another boxing match.

Of course, Floyd made a handshake deal with Dana back in 2019 to set up a fight involving the UFC.

But, all of Floyd’s fight plans came to a screeching halt in 2020 following a series of personal tragedies and the COVID-19 pandemic.

We’re told Floyd was left reeling after both his ex, Josie Harris, and his uncle, Roger Mayweather, died in the span of a week … and fighting was the last thing on his mind.

Now, however, Dana says he’s talking with Floyd … and a possible collaboration is far from dead.

“Floyd and I still have dialogue and go back and forth. We’re still interested on both sides.”

So, who’s the opponent? A boxing rematch with Conor McGregor perhaps?

“No no no. I know he would rematch Conor McGregor but I don’t know if you heard about this but Conor McGregor’s retired,” White says.

McGregor announced his retirement from MMA back in June claiming he’s lost his passion for the sport — but no one really believes him … except maybe Dana?!

“When I’m doing things right now and running business, I don’t even think about Conor. Conor is retired. As of right here now today, Conor is retired until Conor tells me differently, I’m not trying to make any fights for Conor.”

When challenged about Conor’s true career plans, White explained it this way …