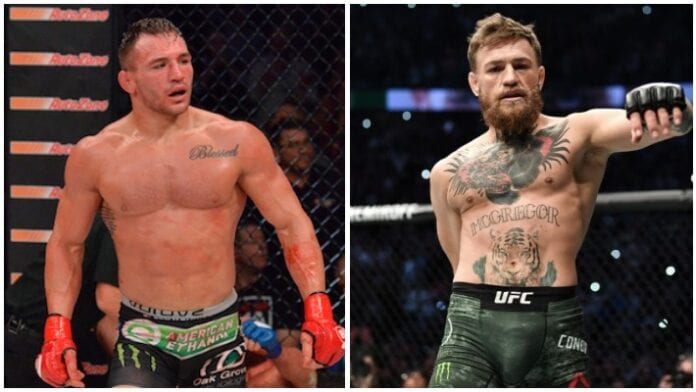 On Friday evening Michael Chandler scored his most impressive victory to date knocking out former UFC lightweight champion Benson Henderson in the first round announcing his venture into free agency with a bang. For Henderson, it was a tough pill to swallow being his first knockout loss since August 2014 when he lost his title to Raphael Dos Anjos. Chandler and Henderson previously fought at Bellator 165 in November 2016, where they fought to a razor-thin split decision. In the rematch, Chandler was able to close out the rivalry in emphatic fashion.

Michael Chandler (21-5 MMA, 18-5 BMMA) exploded his way into free agency with a first-round finish of Benson Henderson at Bellator 243 and, in between questions about his fighting future, he was asked about the possibility of a future matchup with UFC superstar McGregor (22-4 MMA, 10-2 UFC). His reply revealed his respect for the Irishman’s accomplishments in the sport.

“The thing about Conor McGregor is I’ve always loved what he has done with the sport,” he told reporters, including MMA Junkie, backstage after his victory. “I’ve never once hated on him. In the very beginning, I did say he’s not as good as he thinks he is, but he’s better than we think he is, and he continued to prove that. I still don’t think he’s as good as he thinks he is, but that’s a testament to his self-belief. If all of us had a little bit more self-belief, like Conor McGregor, life would be a little bit different and we’d look at life through a different lens.”

At the age of 34, Chandler thinks he’s entering his fighting prime, and said that he would have a very straightforward gameplan if he ever faced McGregor. “Iron” also predicted that if that day came, he’d finish “The Notorious” in short order.

“As far as that fight goes, I finish Conor in under two, in my opinion,” he stated. “It’d be similar to, shades of (Nate) Diaz I. Wear him down, hit him with hard shots – hard, hard shots. Take every single one of his shots. He’s got that sneaky and strong and thick and hard left hand that he throws, and it’s straight. You avoid that, wear him down a little bit, make him see Jesus. Just put him out.” (R/T MMAJunkie)

Watch the full interview below: