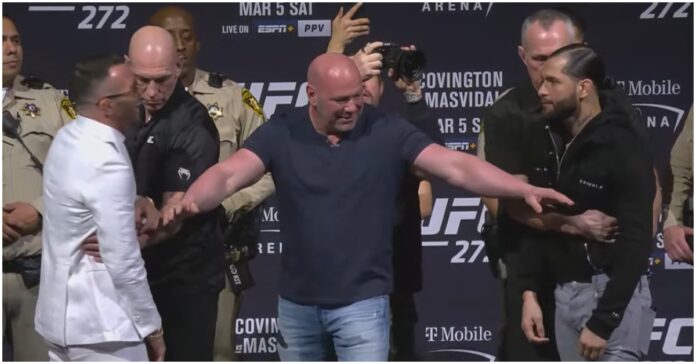 Colby Covington and Jorge Masvidal came face-to-face for the first time ahead of their main event match-up at UFC 272.

The former teammates turned bitter enemies bickered back-and-forth throughout the UFC 272 pre-fight press conference before squaring off at its conclusion.

The reason Covington vs. Masvidal is such an intriguing fight is because they were former training partners who lived together and were basically best friends.

Unfortunately, that relationship fell apart shortly after Covington claimed the interim UFC welterweight title and turned heel in order to save his career with the MMA leader.

‘Chaos’ and Masvidal went from friends to enemies and that was awkward considering they still trained together at American Top Team. The gym drama became so toxic that the welterweight duo were both kicked out of the Miami, Florida facility.

Covington has since found a new home in the same city at MMA Masters, while Masvidal was eventually allowed to return to ATT after twisting the arm of Head Coach and owner, Dan Lambert.

The distance between Covington and ‘Gamebred’ has done nothing to calm their feud, which will come to a head when they clash at UFC 272 which is set to take place at the T-Mobile Arena in Las Vegas on Saturday March 5.

Who do you think will win the UFC 272 main event? Colby Covington or Jorge Masvidal?