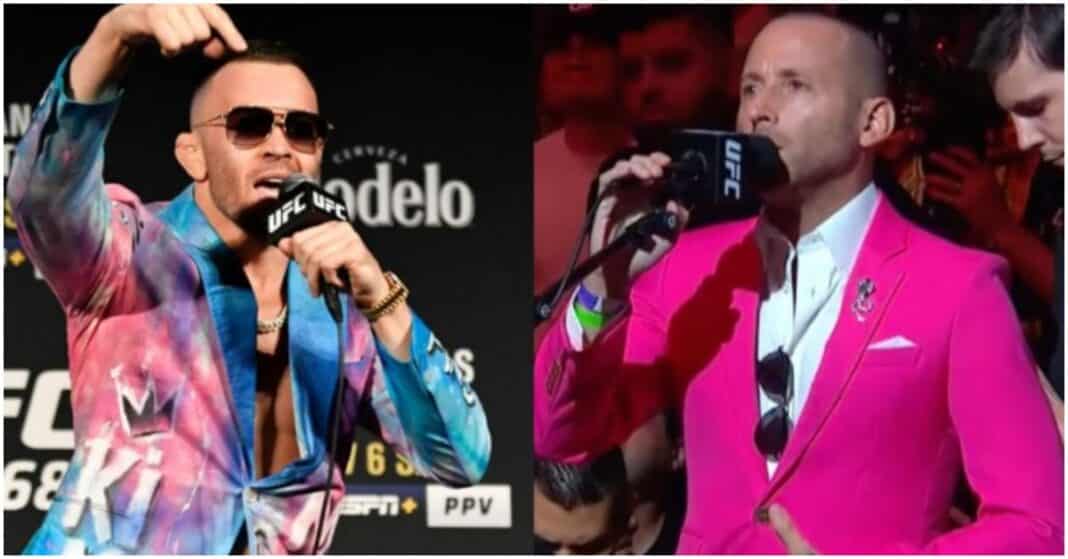 Colby Covington clowns on a reporter for pressuring him to have independent doctors take a look at the x-rays of his jaw after the first fight with Kamaru Usman.

Covington got into a heated exchange with a reporter at the UFC 268 press conference. The reporter was trying to get Covington to admit that his jaw was broken in the first fight with Usman. He demanded Covington share the x-rays with doctors if he loses his rematch with Usman. Covington then came right back at the reporter and poked fun at his bright pink suit he had on.

“You look like a bottle of Pepto Bismol and it makes sense because you’ve got diarrhea at the mouth, son! Get out of my arena! Get out! Get this clown out of the building,” Covington said to a chorus of laughs from the crowd. “Yo, where did you get your suit from JC Penny?” I came here on a G5, my chain cost more than your house son! My f*ckin chain cost more than your house. Get this clown outta’ the building. Get this clown outta’ here, man. Dressed like a bottle of Pepto Bismol. He’s got diarrhea of the f*ckin mouth. Diarrhea of the mouth, get this guy out!”

Covington then went on to shout out the tailor and designer of his suit that he wore to the press conference.

Covington can be heard on the stool in the middle of rounds saying ” I think he broke my jaw” very clearly in their 1st fight. Covington has been very vocal and has denied the fact that Usman did break his jaw in the fight. Usman would end up winning the first fight against Covington in the 5th round.

The first fight was razor-thin before Usman finished Covington late in the fight. It has been Usman’s biggest test to date, and the second fight may be the same. The second fight could be even closer, as both fighters have improved since their first fight.

Who do you think will win the rematch at UFC 268, Kamaru Usman or Colby Covington?