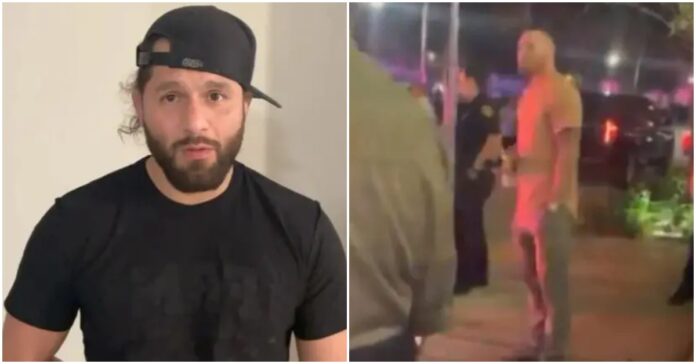 Colby Covington was videoed with a swarm of cops surrounding him after he allegedly got into a street fight with Jorge Masvidal outside of Papi Steak in Miami Beach.

According to TMZ Sports, Covington was eating with the Nelk Boys inside the restaurant. After finishing his dinner ‘Chaos’ was attacked by ‘Gamebred’ as he exited the facility.

In the video, Covington can be heard describing the alleged attack, saying.

“He’s over here swinging, trying to come at me, and I ran …”

“I don’t know,” Menery responded. “You’re all over the internet.”

You can watch the full video here.

Menery expressed his feelings about the incident on Twitter.

“All i can say is I’m extremely disappointed in @GamebredFighteras a professional fighter tonight. You let down alot of people tonight bro. Disappointed,” Menery wrote.

Masvidal took to social media soon after the incident to send a message to his former friend turned bitter rival.

“I’m calling this show your face challenge,” Masvidal said in the video directed at Covington. “What’s up? I’m from Day County. If you talk that sh*t, you’ve got to back it up, that’s how my city rolls, man.”

READ MORE:  Mauricio ‘Shogun’ Rua discusses the final bout of his storied career: "I did everything that I wanted with my career."

The BMF titleholder seems to be suggesting that he did some visible damage to Covington’s face during the street brawl.

His manager, Malki Kawa, took to social media to insinuate that ‘Chaos’ lost a tooth during his unsanctioned rematch with Masvidal.

“I’m hearing that a someone not from miami who says he’s the king of it is missing a tooth,” Kawa wrote. “Can someone confirm this? I need the video asap.”

Do you think Jorge Masvidal was out of line for trying to fight Colby Covington in public?