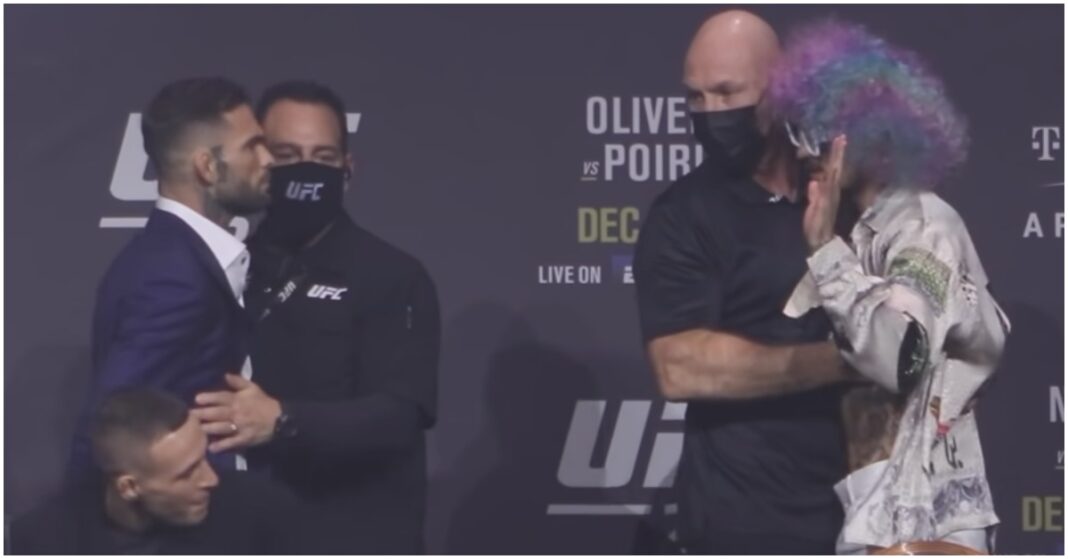 There’s no love lost between Cody Garbrandt and Sean O’Malley, that much was evident at Thursday’s pre-fight press conference ahead of UFC 269.

On Saturday, the former bantamweight champion is set to make his flyweight debut when he takes on Kai Kara France on the UFC 269 main card.

Just before he does, O’Malley will be looking to pick up the biggest win of his career when he takes on Raulian Paiva in the first pay-per-view fight of the evening.

‘Suga’ had previously been angling for a fight with Garbrandt before ‘No Love’ opted to drop down in weight. Despite the fact they no longer compete in the same division it was clear both men still fancied fighting each other.

“Listen, this dude he comes out here does his thing, he walks his walk,” Garbrandt told reporters at the UFC 269 press conference. “Look at him, he’s dressed and has the hair, but he’s got different problems than ‘No Love’ problems. He’s got Raulian problems. Raulian’s battle-tested in here way father than he’s ever been.”

O’Malley responded by taking a shot at Garbrandt’s recent record.

Garbrandt fired back by reminding O’Malley about the different levels of opponents they are facing.

“That’s a good one,” Garbrandt said. “And you haven’t fought anybody. Who the f*ck have you fought? Listen, I can’t even be mad at this kid. He understands when he jumps up in competition his hype goes away, his money goes away. His little sponsors go away because he’ll get his ass beat. Straight up.”

Things got particularly heated when ‘Suga’ requested to staredown Garbrandt.

The former 135lb king rushed across the stage towards O’Malley before security intervened and shut down the duo’s impromptu staredown.

After things settled down, O’Malley continued to take shots at his rival who he believes is one loss away from calling it a career and joining the UFC broadcast team.

“Cody’s one fight away from the commentary booth next to Dominick Cruz,” O’Malley said. “So I don’t know what the f*ck he’s talking about.”

Garbrandt fired back by reminding O’Malley that he has accomplished so much more in the sport already and suggested ‘Suga’ will never reach the level he has.

“I’ve still done more than you’re ever going to do in this career,” Garbrandt said. “You’re going to amount to nothing. Trust me. Once you lose you’re going to get carried out on another stretcher and where are you going be at?” (Transcribed by MMA Junkie)

Do you still want to see Cody Garbrandt vs. Sean O’Malley?