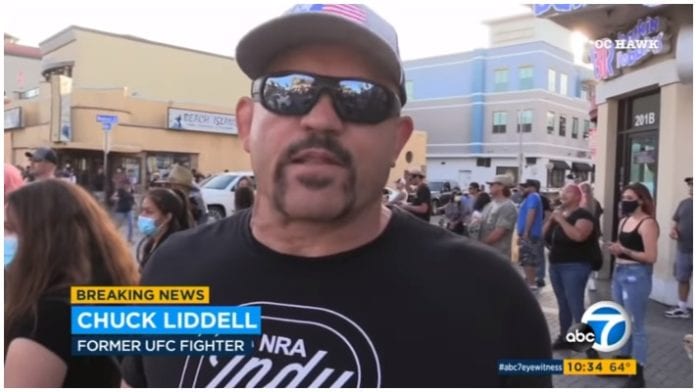 Former UFC light-heavyweight champion Chuck Liddell has been trying to ease tensions in Huntington Beach, California as protests threatened to turn ugly. Since a police officer in Minneapolis, Minnesota killed an unarmed black man named George Floyd on May 25 the United States has been the setting for mass protest – some of which has turned violent. Liddell was actively trying to prevent a similar outcome in the city of Huntington Beach.

Speaking to ABC 7 ‘The Iceman’ urged against violence in this situation and stressed destroying property and hurting people is not going to help anybody.

“It’s good to see people defending their city. It’s just terrible. I mean, violence begets violence. Violence doesn’t help anybody. We all know what happened was wrong,” Liddell said of the George Floyd murder. “Everyone I know thinks it was wrong. It was hard to watch, but this does not help. Destroying cities, destroying people, hurting people does not do any good for anybody. So, hey, protest all you want but do it peacefully.”

This follows on from current light-heavyweight champion Jon Jones actively trying to protect his city of Albuquerque, New Mexico. Jones is seen on video challenging vandals and confiscating spray paint. He has since been part of the effort to help rebuild local businesses that have been negatively impacted by riots and looting.

Do you think UFC legends such as Chuck Liddell are able to make a positive impact during these tough times?