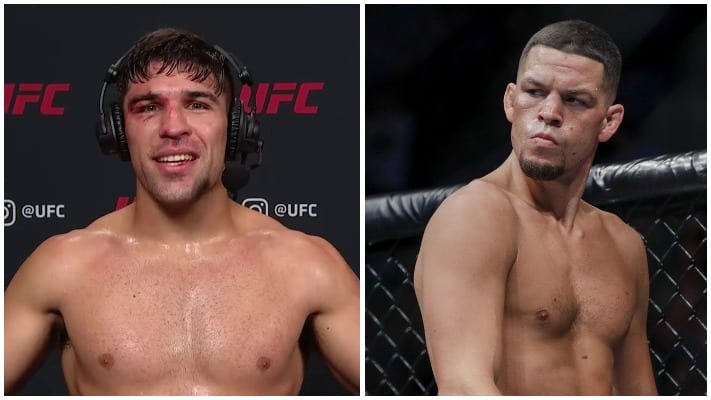 Top welterweight contender Vicente Luque has been campaigning for a Nate Diaz fight for well over a year at this point. Two of the most exciting fighters in the sport have both seemed to pique some interest lately in facing each other maybe even by the end of 2021. Luque was asked about the Diaz rumors when speaking to MMA Fighting.

“He’s a great fighter, he’s a legend,” Vicente Luque said about Diaz. “Having that on my resume, that’s huge for me. The other thing is he has that status. He is the gangster. He goes in there and he fights and he goes forward and always he will fight till the last second with all the heart he has and I want to go and step in there with a guy like that and show that I can do that and maybe I can do that even better than he does.

“I think it’s about my legacy, about showing what my style is against a tough guy like Nate. Against a guy that has already proved he’s one of the toughest in the sport. That’s what this fight is for me.”

“I’m really interested in this fight,” Luque told MMA Fighting. “I know that Nate is interested as well. So I think it’s the fight to make. We’re waiting. I let my manager Ali [Abdelaziz] [know], he knows that I want that fight. He’s working on it.

“Nate has clearly shown he wants that fight, he wants to make it happen. I think it’s up to the UFC to make it happen, set a date for us and I think it’s a big fight. I’m sure the fans are going to enjoy it. They’re going to want to watch that one. Even though it’s the last month of the year December, we still can catch that Fight of the Year possible contender. I would love to have that fight.”

Diaz even tweeted the video of Luque talking about him in a post-fight presser a few months ago.

Luque believes Diaz could be the perfect matchup for him as the welterweight division being all booked up at the top.

“It’s the perfect matchup for me right now, considering I don’t have many different names I can face,” Luque said. “Edwards doesn’t want to fight anybody or he might fight [Jorge] Masvidal, we don’t know what’s going to go on with that. I would love to have a rematch against him but it doesn’t seem likely. I’m not going to fight Burns everybody knows that. We’re brothers and that’s not going to happen. Colby [Covington] is lined up with Kamaru [Usman] so Nate is a guy, he has a big name, he has been doing a lot in my division and in the history of the UFC.

Luque went as far as to say that he feels he and Diaz could be more than the five-round 25-minute limit. He believes they could go as many as 10 rounds in their fight, which would be quite the show for fans.

“I want to fight five rounds to see how it is, especially possibly fighting for the title after another fight,” Luque said. “I would love to have a five rounder. I know Nate likes to have five rounds so let’s do that.

“I even threw out there we could do 10 rounds and I’m serious about that. Maybe six, seven, eight rounds, something different if they want to throw it in just to make it special, I would be down for that as well.”

While there have been no offers put on the table quite yet for either fighter, Luque feels the time to make it is now and seems adamant about making it happen for the fans.

“It’s something that we both want, me and Nate want,” Luque said. “It’s likely to happen. I mean we’ve got to wait for the UFC. At the end of the day, they’re the ones that are going to make the fight happen. I don’t know.

“I think that it’s kind of like a no brainer for the UFC. Two tough guys that want to face each other and it’s going to be a banger of a fight. The fans will enjoy it. It only makes sense for it to happen so we’ll see.”

It’s hard to deny, this would be a big-time fight and one that would not disappoint the fans. It’ll be interesting to see how this plays out and if these contracts eventually get offered.

Do you think we see Vicente Luque vs Nate Diaz?