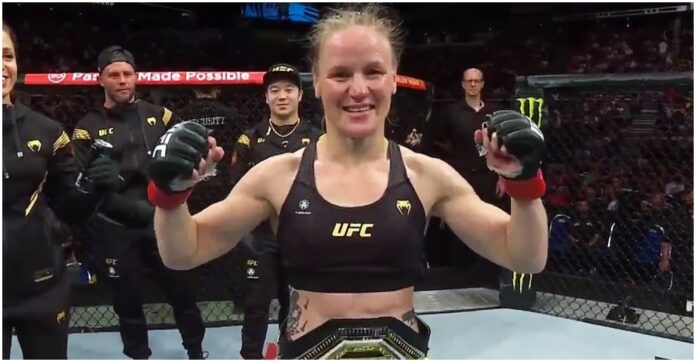 Valentina Shevchenko successfully made her seventh defense of her flyweight championship in Singapore, edging a split decision. However, in a contest that could have fallen in Santos’s favor. The scorecards read 49-46 and 48-47 on two of the judges for the champion. One judge scored the fight 48-47 for Santos.

The challenger made it an extremely difficult night for Shevchenko, who eventually looked human after cruising her way through contenders since becoming the champion. Both women clashed heads after a strong start from Santos, with Santos coming off worse, which caused a notable momentum switch.

In her post-fight interview backstage with Megan Olivi, Shevchenko said that she had stepped into the Octagon with a foot injury and had caused further damage after throwing kick after kick at Santos.

“I feel amazing. I stepped into the fight injured with my foot, but it looks like, after the fight, I kicked so much, it’s a little bit more injured. Besides the foot, we are going to have an X-ray after, but besides this injury, I feel amazing.”

Megan Olivi asked the question of where Santos ranked as a challenger as opposed to her previous opponents, giving the razor-close fight.

“I think she’s a very good, very tough opponent and definitely kind of a heavier person.”

The victory moved Shevchenko to (23-3) in her career, taking her win streak to nine. Santos gave the champion her most difficult fight in some time, and it’s a fight we can expect to see run back next or down the line.

Santos saw her four-fight win streak end in Singapore, falling to (19-2) in her professional mixed martial arts career. Although being unsuccessful in attaining gold, the Brazilian fighter earned respect from the whole roster and fans worldwide. A loss on paper, but her stock grew after five hard rounds.