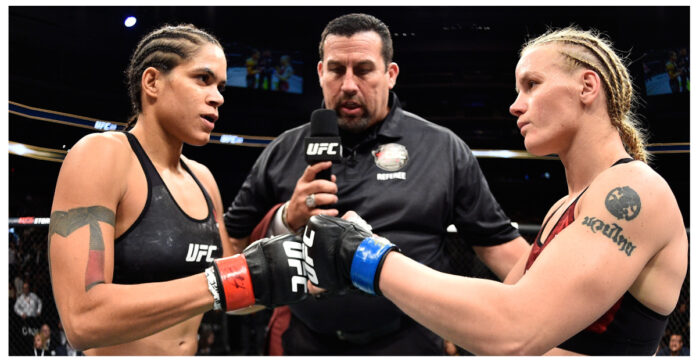 Amanda Nunes made the correct adjustments in order to right the wrong in her main event clash with Julianna Peña at UFC 277, becoming the first fighter in UFC history to attain champ-champ status twice.

Nunes (22-5) cruised her way to regaining her strap in a relatively dominant unanimous decision victory over Peña (11-5). The Brazilian’s pinpoint accuracy resulted in Peña being dropped to the canvas on three occasions, as well as suffering a gruesome cut on her forehead.

Peña was left battered, bruised and with a face full of blood after five-hard rounds of receiving punishment. However, her stock was not affected due to the heart, bravery, and will to win she showcased, which forced fans to appreciate her spirit.

After her dominant showing, a number of fighters took to Twitter to congratulate who many believe is the greatest women’s fighter of all time, Amanda Nunes. Among them were Nunes’s former foe and current flyweight champion Valentina Shevchenko who claimed Nunes had copied her stand-up game in the fight.

In the past, Nunes held two victories over Shevchenko, but many would argue the second fight could have been scored for the Kyrgyzstan native.

The pair first met at UFC 196 in Las Vegas, which saw Nunes take a unanimous decision victory. However, the second meeting was decided via a split decision in favour of Nunes at UFC 215. That being said, the decision could have fallen on either side.

While Nunes smashed her way through her opposition, the question was always asked, who could give the greatest women fighter of all time her toughest test? The response was always Valentina Shevchenko by fans, analysts, and fellow fighters.

With UFC President Dana White saying a third bout between the two champions makes sense next, it’s a case of working out the logistics before taking the talk seriously.

Do you think we see Amanda Nunes vs Valentina Shevchenko next?