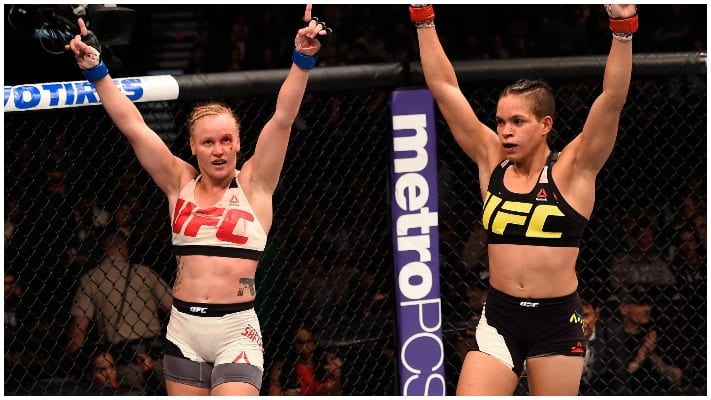 Valentina Shevchenko is not in a rush to complete her trilogy with Amanda Nunes.

The UFC flyweight champion made an impressive fifth defence of her title this past weekend. Shevchenko dominated former strawweight queen, Jessica Andrade, before finding a finish in the second round.

Post-fight, talk quickly turned to a trilogy with dual weight UFC champion, Amanda Nunes. Dana White wasn’t too keen on making the bout anytime soon. The UFC president insisted he would only match the two best fighters in WMMA if they both explicitly asked for the fight.

“(They should have) their own legacies. They fought a couple times. People can think whatever they want. There’s always going to be somebody else coming up (to challenge Shevchenko). There’s always a new contender. And it’s not Valentina’s fault that she’s one of the all-time baddest women on this planet. So making her move up to 135 pounds just doesn’t make sense when she did it twice.”

During a recent interview with LowKickMMA, Shevchenko gave her thoughts on a potential trilogy fight with Nunes and when it might happen.

“If everything is gonna be the same way, she continues to be successful and for me the same. It’s gonna happen naturally, without someone to force this,” Shevchenko said. “Without someone to put pressure. Without clamouring, like, ‘give me this fight! I need this fight!’ No. I think even more interesting it’s going to be if it happens naturally. When there is like no other. This is the only one fight to make happen. I think it’s going to be even bigger then.”

The 125lb champion will now take some time away from the sport to travel before returning to the Octagon later this year.

“End of summer,” Shevchenko said when asked when she will next fight. “Yeah. I think that way I will have time to travel, to discover more places, more interesting stuff to do. And then to prepare for the fight too.”

When do you think Amanda Nunes vs. Valentina Shevchenko III will happen?