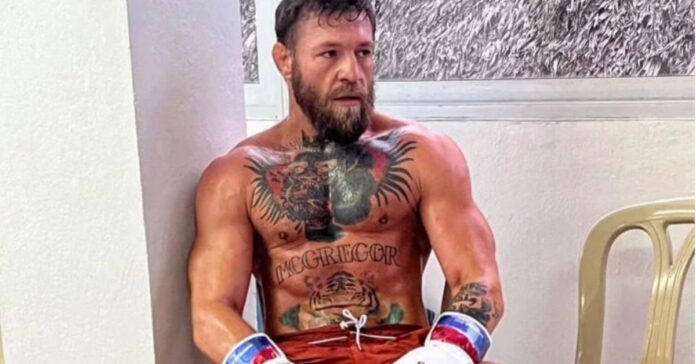 Conor McGregor is the only UFC athlete that has not been tested so far in 2022.

Former UFC two-division champion Conor McGregor has been on the sidelines since his last outing against Dustin Poirier at UFC 264 in Jul. 2021, when he suffered a gruesome leg break injury. He appears to be recovering well and recently got back to training in all aspects of mixed martial arts.

Aaron Bronsteter of TSN first reported that Conor McGregor was the only athlete on the roster, excluding those signed after Aug. 1, that was yet to undergo a single test by USADA this year. When probed on the issue, USADA clarified that its officials are not allowed to share details on any specific fighter’s inclusion in the program or removal from it. They provided a statement to MMA Fighting about McGregor’s status.

“Once UFC athletes are enrolled in the testing program, they are subject to testing – even when not competing – unless they notify the UFC of their retirement, their contract is terminated, or they are otherwise removed from the program,” USADA officials wrote. “In the event of an athlete’s return to the UFC, they are required to remain in the USADA testing pool for six months before they are permitted to compete.

“Similar to World Anti-Doping Agency rules, the UFC may grant an exemption to the six-month written notice rule in exceptional circumstances or where the strict application of that rule would be manifestly unfair to the athlete, but in both cases under the UFC rules, the athlete must provide at least two negative samples before returning to competition. We do not comment on the testing pool status of any particular athlete.”

Each athlete of the UFC, including Conor McGregor, is subject to random testing at any time as part of its anti-doping program. While the testing is considered random, it is more focused due to limited resources rather than a compulsory regular test. McGregor would need to stay in the testing pool for at least six months before he is allowed to make his comeback.