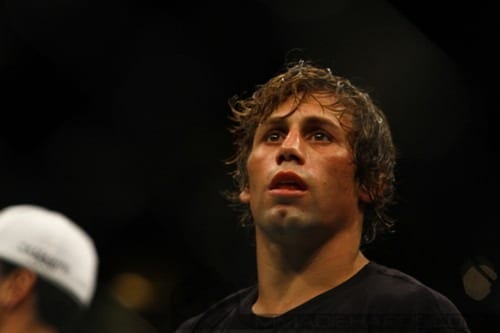 Urijah Faber is smart enough to admit that he is in a weird place right now regarding his next fight:

“It’s a little weird right now when you look at the list,” he said.

“The California Kid” was set to take on Masanori Kanehara at September’s UFC Fight Night 52 from Japan, but had to pull out due to a rib injury. However, Faber is healthy once again and looking to get back in the octagon.

So who will the former WEC champion’s next opponent be? Currently Faber sits at No. 3 in the bantamweight division. Above him are former champions Renan Barao and Dominick Cruz, and of course, current champion and teammate TJ Dillashaw. But it seems like none of these bouts are really options.

Faber has already fought Barao twice, losing both times and making a third bout very unlikely. Although “The California Kid” and Cruz have an unsettled rivalry that awaits a trilogy match to settle the score, Cruz is in line to challenge for the belt, eliminating that option. It’s also unlikely that Faber and Dillashaw ever fight as they are friends and training partners on Faber’s Team Alpha Male.

That leaves one more logical option for the former WEC champ, a scrap against No. 4-ranked Raphael Assuncao. Assuncao is currently riding a seven-fight win streak, and although he wants a title shot, he may not want to sit out while Dillashaw and Cruz battle it out. It seems like this fight makes perfect sense, except to Faber himself. “The California Kid” sat down with MMAFighting.com to discuss why he is not so interested in this potential scrap:

“Fighting Raphael Assunaco isn’t that exciting to me. I have nothing against him, he’s a good guy and a good fighter. I just think there are other challenges out there that could be better for me.”

The two men have actually fought before, back in the WEC in 2010. The result was Faber defeating Assuncao by third-round submission.

Despite not being interested in this possibility, Faber, being the company man he is, wouldn’t reject it if the UFC wanted to make the fight:

“I mean, if Assuncao was a fight the UFC wanted, I wouldn’t say no to it. I’ve never said no to any fight the UFC has asked of me. It’s not a fight I’d lobby for. Right now I’m willing to wait and see what comes up.”

It will be interesting to see what’s next for the California native, but one thing is clear: after six consecutive title defeats, Faber’s road to the bantamweight title is a long and difficult one.