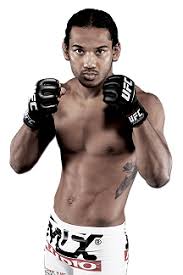 Mike Drahota: I think that on paper, this bout certainly provides a very intriguing matchup in the sense of unifying the UFC and Strikeforce Lightweight belts. Gilbert Melendez has been an opponent discussed for Ben Henderson for a good while now and he’s finally got the bout he wanted. But I’m not sure he’s ready for it quite yet, coming off a long layoff after a war with Josh Thomson that many thought he lost last May. Ben Henderson has regularly been fighting the best in the world while Melendez has been sparingly fighting decent but not top-ranked opposition. I say Ben Henderson grinds out another uNanimous decision win to further prove his dominance at 155.

Rory Kernaghan: I’ve said it before and I’ll say it again-Bendo is too much for Melendez. This fight is going to be an absolute war, but I feel like Gil is going to be taking all the artillery. Look for Henderson to use kicks, swift boxing and solid takedowns. I’m not a doubter of El Nino’s talent, but its obvious to me that there is a big gap between the two. I’m going to call this one a five round beating, Henderson by decision.

Bryan Fontez: I’m gonna be honest here, while I know just as well as anyone else that anything can happen, I think Benson Henderson and the rest of the top lightweights are simply on another level that Melendez has never competed at before in his entire career. With that alone I’d say Bendo has this without a doubt, but toss in the fact that this is Melendez’ UFC debut and I’m gonna say this one isn’t even close. I don’t know when it’ll happen exactly, but I’m confident Henderson is gonna finish this one and I’d say the 2nd round from back mount via TKO.

Mike Drahota: Frank Mir is no easy task for Daniel Cormier in his UFC debut, but as he’s stated recently, he doesn’t feel that Mir is necessarily a step up in competition from his two highest profile wins over Josh Barnett and Antonio Silva. That said, Mir is obviously light years ahead of Cormier in the submission department, but that’s his only decided advantage. I know Mir has switched up his training with a move to Greg Jackson’s, but that doesn’t mean he can take a punch any better. Barring any homerun submission, I’m going with Daniel Cormier via second round TKO.

Rory Kernaghan: Mir has been there and done it as far as the UFC Heavyweight division is concerned. The former champion will have to be on his A-game to welcome promotional newcomer Daniel Cormier. This is a tough one for me to pick. I keep thinking of Mir’s past T/KO losses, but then I remember his comeback submission wins. I think the time training at Jackson’s will have done him good, and I’m going to go against the grain and call this Frank Mir by submission in round 3.

Bryan Fontez: Cormier is claiming that he doesn’t believe Mir to be a significant step up in competition from Antonio Silva or Josh Barnett and I’d have to agree with him to be honest. However the one thing that’s been making me think Mir’s got a chance here is his recent switch to team Jackson. If Mir is training hard and smart enough, with the help of Winkeljohn, Jackson and sparring partners like Jon Jones, we could truly be seeing a dangerous new version of Frank Mir. Or we could not, and if that’s the case then I expect a very quick finish by Cormier via TKO in round 1.