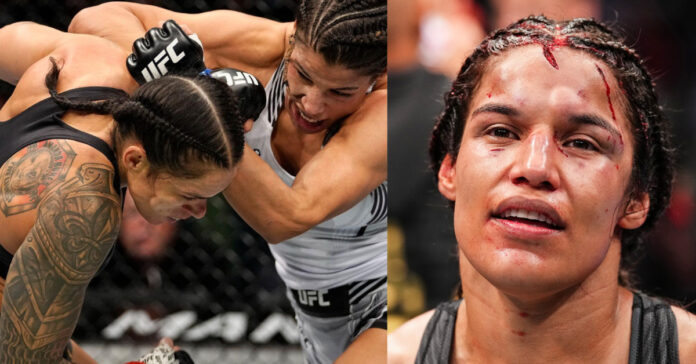 UFC president Dana White has confirmed that Julianna Peña needs to take time off to heal and be with her daughter following a warrior’s performance, but a brutal loss to Amanda Nunes in their headlining clash at UFC 277 in Dallas, Texas.

“The Venezuelan Vixen” was always going to be a game opponent, and put up a valiant defense of her women’s bantamweight title, but unfortunately ended up on the wrong side of a truly brutal beating from “The Lioness”, which included three savage knockdowns in the second round alone, as well as some vicious elbows in the final two rounds, as Nunes showcased her wrestling as well as her extremely versatile boxing.

Speaking in his post-event press conference, White confirmed that Julianna Peña was sent straight to hospital in Dallas following the fight, and had suffered some nasty injuries as a result:

“Julianna’s got a big chunk missing from her forehead,” said White. “She’s going to see a plastic surgeon right now…[she’ll need to] take some time to heal, and then I don’t know. She got pretty banged up tonight – it was like five or six knockdowns in the first two rounds…she needs to take some time off…spend some time with her daughter and then we’ll go from there.”

Although Julianna Peña’s performance and determination were roundly praised and recognized, White said there wasn’t much else redeeming about it, and it was Nunes’ night.

“I thought it was completely dominant,” White said. “There were five knockdowns in the first two rounds. There’s a big difference between submission attempts and knockdowns. They’re not even comparable. Julianna’s tough as nails and her will to win is second-to-none. She wanted to win. I think as dominant as Amanda was – and she was dominant tonight – I didn’t think it was close in any way, shape or form. It was a complete shutout.”