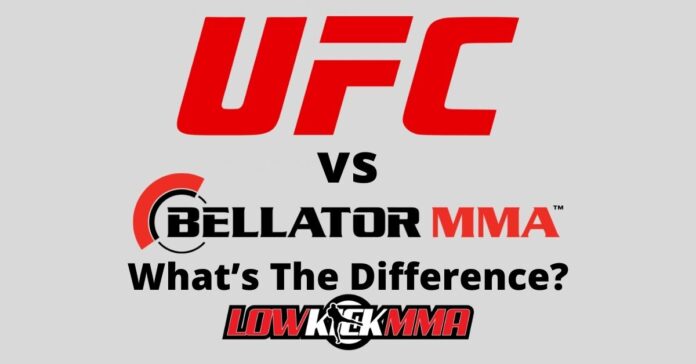 There are two MMA promotions that are the top two in the world. The UFC is number one and in a far second place, but gaining popularity is Bellator MMA.

Even though they’re both MMA promotions, the UFC and Bellator have vast differences between the two. Here are the differences of UFC vs Bellator MMA.

We’ll go through all of their differences from how they were created and even the different cages each uses.

How was the UFC created?

The Ultimate Fighting Championship was the promotion that started it all. It was first created by Rorion Gracie, Art Davie, and Bob Meyrowitz.

Originally it was a no holds barred fighting competition, where anything goes. As time went on, the promotion realized in order to continue it would have to evolve into a legitimate sport.

Rules and regulations started to be set in place and the sport of MMA started to take shape.

The UFC is sold to Zuffa

In 2001, the original owners of the UFC sold the company to Lorenzo and Frank Fertitta, who owned the company Zuffa. The Fertitta brothers bought the company due to the encouragement of Dana White, who they made president of the promotion.

Under the ownership of Zuffa, the UFC continued to run and put on shows. The promotion started to face hardships in the first few years and gradually started to lose money.

This was until the reality show The Ultimate Fighter aired in 2005. Fighters lived in a house and fought for weeks to reach the finals that were held on a live event.

In the 205lb finals, Forrest Griffin fought Stephan Bonnar and their classic fight would change history.

This would start the 2nd MMA and take the sport into the stratosphere. From then on, MMA became the biggest combat sport in the world.

How was Bellator MMA created?

Bellator MMA was founded in 2008 by founder and former owner Bjorn Rebney. The original idea for Bellator was to hold single elimination tournaments that would take place over 2-3 months.

Winners of each early tournament would receive a grand prize of $100k and the Bellator championship. Later on after, the promotions established their champions, the tournament winners would win a title bout against the reigning champion.

This format along with signing young and talented fighters led to Bellator gaining a small, but loyal following. Word of mouth started traveling fast about the promotion and soon Bellator started getting national recognition in the US.

In 2011. Bellator was bought by mass multimedia conglomerate Viacom. This led to the MMA promotion getting more exposure and they would hold their first pay per view event in 2014.

Coker would continue the growth of Bellator as they would get bigger TV deals and sign higher caliber fighters. Today they have firmly placed themselves as the 2nd largest MMA promotion in the world and hold events throughout the world.

The differences between the UFC and Bellator MMA

While the UFC and Bellator are both MMA promotions, they have some vast differences that set them apart. Below are some of the more notable differences between the two.

The first notable difference you see when you watch both MMA promotions is the differences between their cages.

In the UFC, they fight in the legendary octagon that has a 30ft(9.1m) diameter and 6ft(1.8m) high fence. They also own the trademark on the octagon cage, which means know other MMA promotion can use an octagon cage.

The big thing that has always set Bellator MMA apart from the UFC is their matchmaking formats. In the early days of Bellator, they would set up matches based upon who would win each tournament.

For a short time when Scott Coker became Bellator president, the promotion would do away with this format. Going towards a similar matchmaking format that the UFC uses.

Now, the promotion has brought back the tournament format and now call them Bellator Grand Prixs.

In the UFC, they do traditional MMA matchmaking just like how they’ve always done. Their matchmakers choose matchups depending where each fighter is in the rankings and also which fighter sells tickets.

Bellator MMA has held pay per view events in the past, but the revenue from them wasn’t great. They mainly now just hold their events on cable tv.

Bellator has shown that it is willing to co-promote with other combat sports promotions. They have co-promoted past events with Japanese MMA promotion Rizin Fighting Federation and allowed Rizin fighters on their events.

The UFC on the other hand is firmly a standalone promotion that will not cross promote with another company. They’ve traded talent before like they did with One Championship, but have shown no intentions of co-promoting an MMA event.

At one point in time, Bellator MMA tried to extend into other combat sports. They founded Bellator Kickboxing in 2016 to try and take fighters away from the promotion Glory.

This promotion would last until 2019 until it was dissolved. Mainly due to the fact the UFC reached a deal with Glory to show the events on UFC Fight Pass.

The last difference between the two promotions is the caliber of fighters in each promotion. Some Bellator fans may feel like this is a knock on the company, but the stats don’t lie.

Nearly all of the top ranked MMA fighters in the world are under contract with the UFC. That isn’t to say Bellator doesn’t have great fighters, but that’s just how it is.

Here is a comparison of the top 5 fighters in each division between the UFC vs Bellator MMA.