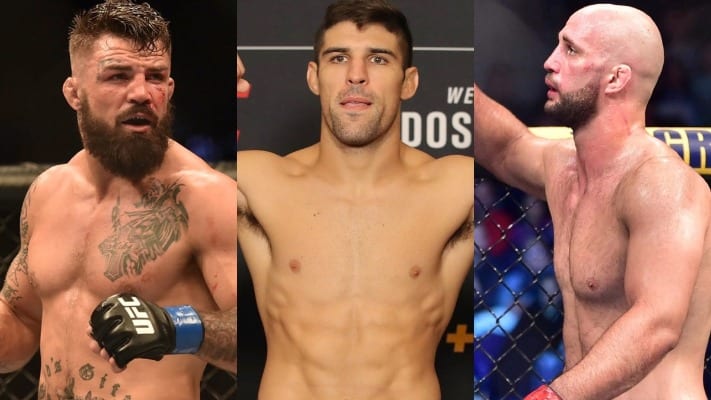 We had some great fights over the weekend (Sat. August 10, 2019) at the Antel Arena in Montevideo, Uruguay. Though it wasn’t the most stacked card, it delivered with eight decisions, two knockouts, and three submissions by the night’s end.

The event featured a rematch between UFC flyweights Valentina Shevchenko and Liz Carmouche, a fight that showed Shevchenko dominate all five rounds with ease to rack up her second title defense, as most expected. There were some really great performances from last night, and we at LowKickMMA have compiled a list of five fights to make after their showings.

Enrique Barzola had a good showing over the weekend, defeating Bobby Moffett via split decision. Though one judge scored it for Moffett, one judge gave Barzola all three rounds. The judging was a little inconsistent, but at least the final results were left without controversy. Barzola’s entire MMA game was on point again, as it usually is. He’s so good at mixing his attack up and is also very good at imposing his will.

“El Fuerte” showed off his crisp hands in bunches and once again showed why he’s such a great takedown artist. Going into this fight with Moffett, Barzola was No. 3 in all-time takedowns at featherweight, and he added to that total in the bout. The craziest thing about that, this division has hosted stud wrestlers like Frankie Edgar, Chad Mendes, Dennis Bermudez, and more. Not only that, but Barzola’s only been in the UFC for three-and-a-half years. That just shows how good he is at getting the fight down to the mat.

He has five separate fights with five takedowns or more, it’s insane how good of a wrestler he is, especially considering where he’s from. South Americans are not known for their wrestling, but Peru’s Enrique Barzola is.

A fight with Grant Dawson would be great because they’re both working their way up the featherweight rankings, and both are incredibly well rounded, as well as they both like to keep an incredible pace. It was a big surprise to see Dawson dominate Mike Trizano the way he did at UFC Rochester, but that just goes to show us all, he’s right where he should be, in the UFC.

Barzola was a finisher before he came to the UFC, now half of his wins are decisions. This is mainly because he almost always goes for a takedown at the end of every round. If he doesn’t finish his opponent in the round, he doesn’t really try to toward the end of it, he tries to win the round, a very smart tactic to use. He has four submission wins (all rear-naked chokes) and four knockout wins (all TKO due to punches), along with eight decisions (six in the UFC).

The Peruvian still has yet to score a finish in the UFC, while 13 of Dawson’s 14 wins are finishes (10 submissions, 3 TKOs). This would be a great matchup to see where each guy is at, and who should perhaps crack the top 15 next in this stacked featherweight division.

These two have fought recently, both within this month actually, with both winning dominantly. Silva had a great showing at UFC Newark by submitting Cole Williams in round one via rear-naked choke, and Burns just defeated the formerly 20-0 Russian stud Alexey Kunchenko via unanimous decision.

The main reason to make this fight is that they’re both stellar BJJ fighters, they’re both finishers (only three decision wins each), and Burns just moved up to welterweight, while Silva returned recently after being out for almost four years.

Both of these guys can fight on the feet well, and both can grapple better than just about anyone, considering both are longtime, high-level BJJ black belts. Burns looked incredible in Uruguay, everywhere the fight went. His striking has really come a very long way, and so has his wrestling. Who expected him to out-wrestle Kunchenko? A guy who has top-notch wrestling, and also great striking. Burns beat him wherever the fight went. He just wouldn’t let Kunchenko get started.

For filling in on short notice, to it being his first welterweight fight since his UFC debut five years ago, Burns deserves a whole lot for that performance he put in. Of Burns’ finishes, five are knockouts, and eight are decisions; and of Silva’s finishes, two are knockouts, and nine are submissions. Silva’s only loss is via DQ as well, which took place in his first fight. Meaning, he’s on a 14-fight win streak.

Since Oezdemir is 1-3 in his last four, why give him someone ahead of him in the rankings? Let’s see if he can rack some wins up before giving him more top-five competition. A fight with Aleksandar Rakic would be very interesting to see. Not only are they both in the top 15, not only are they both European, but they’re both successful kickboxers as well as successful mixed martial artists.

Oezdemir should be 2-2 in his last four according to most, but he wasn’t given that decision against Reyes. “No Time” scored his first win in two years in Urugay, it had been a while since he had his hand raised, and he made sure he wasn’t going to lose again. He had a beautiful performance, ending with a vicious knockout.

Rakic’s last win was against the last guy that Oezdemir had defeated, Jimi Manuwa. Both of them actually knocked Manuwa out in less than a minute, with Oezdemir’s at 42 seconds and Rakic’s at 47 seconds.

Both men are coming into their primes, particularly Oezdemir, considering he’s almost 30-years-old, and Rakic is 27-years-old. Many believe that Oezdemir was pushed up the ladder too soon, that he shouldn’t have gotten a title shot when he did. That may have some truth to it, but he’s a top 10 guy nonetheless, and light heavyweight was weak at that point.

Rakic hasn’t lost since his first fight, an outing in which he lost via submission. He’s on a 12-fight win streak at the moment. Rakic has really come into his own recently. After winning his first decision ever in his UFC debut, and following it up with another unanimous decision, he’s now again coming off multiple knockout wins. How would this one go down?

Who wouldn’t be dying to see this fight if it were made? These two sluggers would put on an absolute war, just like Perry did with Vicente Luque.

Mike Perry showed massive improvements over the weekend. His footwork was much, much better than it’s ever been, and his combinations and punches looked better than they have in a while. He looked like a skilled and accomplished boxer in there. After he lost a couple of fights, it appeared that he grew to be a little bit gunshy for a while, but he’s back to fighting the way he did when he was still undefeated – with no fear.

After having his nose shattered by a thunderous knee from Luque, it’ll take a little while for him to heal and get back at it. Price just lost to Geoff Neal via TKO, so perhaps he could wait and let his brain recover while Perry’s nose heals. These two are always going for the finish. They’re always looking for a war, ending in a brutal knockout with their own hand raised. That’s what each of them wants, that’s what each of them has built their careers on.

These two are also close to reaching their primes, with Perry turning 28-years-old in September, and Price turning 30-years-old later that same month. Price is a little more solid on the ground with a BJJ brown belt and three submission wins, but who knows if that’d play a factor. This is a fight that non-fight fans would get excited for, it’s always exciting to see highly-skilled fighters that are as dangerous as they come compete against one another. Who would take this one?

After scoring his first decision win in his UFC career, and only his second ever, Vicente Luque is more deserving of a top 15 opponent than ever before. To be 10-2 in the UFC, only losses in your debut and to Leon Edwards, with nine of your ten wins being finishes, is quite the resume.

Luque certainly proves records don’t mean much. After losing his UFC debut, he was 7-5-1, now he’s 17-6-1. He’s so technically sound, along with having some real, natural power, he’s a dangerous man for anyone in the world at 170 pounds to fight.

It used to be mostly his hooks that we’d see him hurt people with, but he’s also hurt people pretty badly with his straight punches recently. Not to mention he also has a BJJ brown belt to go with it. Of his BJJ game, we generally only see front chokes out of him, but a variety of them. Luque sees those openings that no one else does, especially on the feet.

With the power he has, he doesn’t throw huge shots, because he doesn’t need to. So many guys we’ll see that have natural power just throw technique out the window because they know they can knock their opponent out, so that’s all they try to do. Not Luque. He’s a very intelligent, and now experienced, fighter. He also has two Fight of the Year candidates for 2019, and things are looking better for him than ever.

Ponzinibbio has been on many welterweight’s radars for a while now. After going 4-0 on “The Ultimate Fighter: Brazil 2,” he had a 2-2 start to his UFC career and has since won seven-straight; finishing the likes of Court McGee, Gunnar Nelson, and Neil Magny. He’s the only person to ever finish McGee or Nelson, his boxing is so sharp and he’s got some good power as well.

The 30-fight veteran is also a BJJ black belt, though we almost never see that out of him. We’ve seen him on the ground in the UFC a few times, and he is very good there, but we haven’t seen him submit anyone. Ponzinibbio likes to stand and trade, pick his shots, like Luque.

It’s surprising that the UFC hasn’t given both of them higher-ranked opponents yet. Not that who they’ve fought aren’t elite, because both have fought, and beat, great competition. However, it’s time for both of them to be fighting the very best welterweights out there. How would this clash of strikers with elite BJJ skills go?