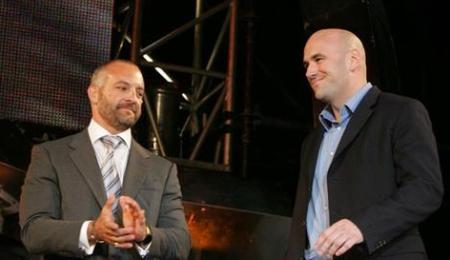 The UFC just announced a groundbreaking partnership with sports apparel giant Reebok at a press conference today (Tues., December 2, 2014), setting the stage for the rumored fighter uniforms to go into effect in July 2015:

UFC president Dana White and CEO Lorenzo Fertitta were on hand to announce the partnership with Reebok, which White deemed “the biggest non-broadcast deal we’ve ever done.”

With the news uniforms each fighter will be provided with their own kit of sponsored Reebok gear, and will receive sponsorship income base on a tier system where champions receive the most, fighters ranked Nos. 1-5 on the day of their weigh-ins are next, Nos. 6-10 follow them, and so forth.

White immediately tweeted a quick preview of the uniform:

Fertitta stated that the “the vast majority, if not all, of the revenues” from the deal would be re-distributed to fighters. Although not able to reveal all of the details of the deal, Fertitta said that each fighter would have their own personalized kit that will include a 20-percent royalty kickback based on sales of their kits.

The promotion’s co-owner expressed his excitement as the sure-to-be controversial (and potentially groundbreaking) contract:

“We look at this as Reebok and the UFC are essentially changing the sports landscape once again. This clearly has never been done in combat sports. Reebok will be the exclusive worldwide outfitter of the UFC, and as part of this deal and this partnership, this will be the biggest non-broadcast partnership that our company has ever signed, so it is significant.

We’re continuing to do things and implement things to elevate the level of the sport, and really take it in a place where other major sports leagues are. So the way that this outfitting policy will work is that it will allow for each of the fighters’ individuality, but also will provide a unique, iconic and consistent look for all the athletes, obviously very different from where the sport has been in the past, where it is essentially, for lack of a better word, a bit of a mish-mash with various different sponsors, different looks, brands, and styles.”

The uniform deal is most likely to create a serious backlash among fighters, but the UFC’s partnership will supposedly help fighters earn more if they perform. Fertitta touched on how that will be true with the new system:

“At the end of the day, the more successful you are and the more demand there is for you, as an individual brand, [the more] you’re going to sell. That’s the way the system works, it’s a capitalistic system here at the UFC.”

White chose to focus on the fact that we often don’t see fighters battling it out with their sponsors, something that will go away with the deal given that each fighter will have guaranteed sponsors and revenues:

“You guys have seen it when we’ve had press conferences before and fighters are upset about sponsors, guys are walking in wearing UFC clothes because they don’t want to haggle with the sponsors anymore. Whether you’re at the top of the heap, or you’re at the bottom, (now) you know every time you step in there, you’re getting paid. You have a sponsorship; you’re getting paid every time you get in. And it’s more incentive to get bigger and get better.”

White may have a good point there, as the deal will make it easier for up-and-coming fighters to find sponsors, giving them built-in blue chip sponsors and therefore more time to train for their upcoming bouts. Fertitta elaborated on this positive aspect of the deal:

“[This announcement] is going to help the fighters because it’s going to allow them to focus more on their training, and not have to run around and try to get some of these sponsors that you guys are all familiar with, that aren’t blue-chip Fortune 500 companies, I might add. If there is a sponsor on our uniform or on our kit, it’s going to be a major global brand like you see in some of these other sports, like the European soccer leagues. So just that alone is going to completely change the perception of the sport, the perception of the athlete, the level that we’re at.”

So the UFC’s rumored (and controversial) uniform deal is in place, and while it will undoubtedly provide a boost for fighters who are still struggling to make a name for themselves, it will probably also create a decent amount of discord among the established fighters who already have their name sponsorships in place.

What are your thoughts on this potentially groundbreaking deal? Will it help redistribute the wealth among the roster, or is it just another way for White and Fertitta to control and profit from every facet of the UFC?