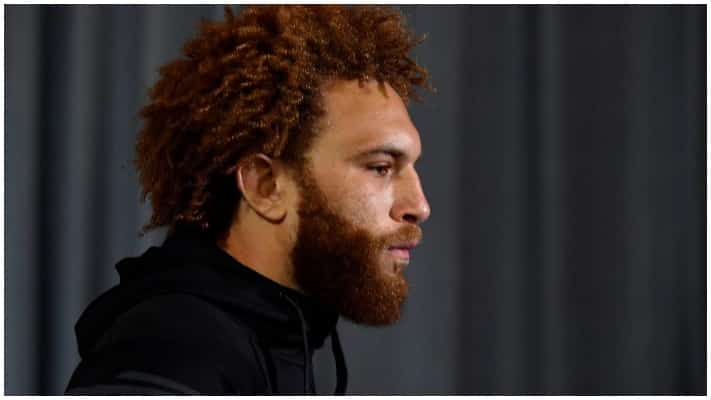 TMZ reported Tuesday night that the UFC has cut Pena after his domestic violence arrest on Saturday.

In a statement to TMZ, the promotion said, “UFC is aware of the disturbing allegations concerning the recent arrest of Luis Pena. Mr. Pena has been open about his struggles with mental health and substance abuse issues, and the organization has on multiple prior occasions attempted to help him get professional treatment. At this time, UFC believes Mr. Pena needs to deal with the health and legal issues in front of him and consequently has informed Mr. Pena’s management that his promotional agreement has been terminated.”

Disturbing details about the altercation were revealed early Tuesday morning.

According to an affidavit acquired by MMA Fighting, “Pena allegedly struck his partner multiple times with a closed fist and continued striking her on the ground, leaving minor abrasions on the top of her left hand, left wrist, and an alleged bite mark to her left knee region during the dispute in Deerfield Beach, FL. A second woman allegedly witnessed the assault and attempted to intervene, at which point Pena allegedly struck her with a closed fist, knocking her to the ground. The blow caused a purple contusion and laceration to the second woman’s right elbow.”

This is not the first time that Pena has been in trouble. In June, the now-former UFC fighter was arrested on battery charges, robbery by sudden snatching, and criminal mischief after a fight with his girlfriend. He was accused of physically assaulting his girlfriend

and breaking her phone. His girlfriend would end up dropping the robbery by sudden snatching charge.

Pena was a contestant on season 27 of The Ultimate Fighter and an eight-fight veteran of the UFC. He went 5-3 with the promotion, most recently defeating Alexander Munoz in April via split decision.

Pena has not released a statement.