If you’re counting, exactly two of the 10 fights on Friday night’s fight card from Nashville went to decision. As many expected, the main event between Melvin Guillard and Jim Miller was not one of those two fights.

Before the fight both Guillard and Miller said that they would look to capitalize on the first mistake of their opponent. That first mistake came from Guillard, as he attempted to throw one to many flying knees and found himself deposited on his back via a Jim Miller takedown. From there it didn’t take long  for Miller to take advantage of another opening, as he transitioned to the back of Guillard as Guillard attempted to get to his feet. Miller sank the rear naked choke in at that point and seconds after the fight went back to the ground Guillard was forced to tap.

-Where does the win put Miller? Let’s not forget that before Miller ran into the steamroller that is Benson Henderson, he was on a seven fight winning streak and hearing his name mentioned as a possible challenger for the UFC Lightweight title. This win, may put Miller back on track to get a title shot in the not too distant future.

-What went wrong for Melvin Guillard? Guillard said that his last fight, a first round submission loss to Joe Lauzon had taught him that he needed to be patient. However, it did not appear that the lesson took hold once he entered the Octagon. He relied too early and often on flying knees, allowing the veteran Miller to anticipate that they were coming and time his takedown well. Two consecutive first round submission losses in any UFC weight division do not bode well for a fighter’s chance to stay at the top of the heap. With Guillard fighting in what is arguably the most stacked division in the UFC, he’s probably looking at a healthy climb back up the ranks.

-How did Mike Easton and Jared Papazian not win Fight of the Night? I understand that Pat Barry gets a lot of love in the MMA community. He’s an entertaining guy, inside and outside the Octagon, but his fight against Christian Morecraft just did not compare to the three round slugfest that Easton and Papazian participated in. As they say, the numbers don’t lie and the numbers say that between Easton and Papazian they landed 225 strikes with 86 of those being power strikes. Barry and Morecraft?  They landed a total of 18 strikes. I’m not saying the Barry versus Morecraft fight was bad, far from it, but it did not deliver like the Easton versus Papazian fight.

-Is there a more entertaining fighter than Pat Barry? Outside the cage Barry seems to be one of the easiest going guys in MMA, quick with a joke and always with a smile, but when he’s in the moment he can be downright scary. Don’t believe that? Watch the end of the fight when Barry gets pushed off Morecraft, the look on his face is one of pure rage. It’s only there for a brief moment, but when it is, it’s a look to remember.

-Was there a fighter happier than Jorge Rivera? Before the fight card began it was announced that Jorge Rivera would retire after his bout against Eric Schafer. Rivera really struggled in the first round and things did not look good for him in his last MMA contest. However, he turned it around in the second and used his heavy hands to end the fight via TKO. After the stoppage, as chants of “Jorge” rained down on the Octagon, he knelt and kissed the mat before rising to his feet to acknowledge the crowd. Rivera got a bit choked up in his post-fight interview and it was good to see him go out on a high note.

-Fight of the Night: Mike Easton versus Jared Papazian. These two bantamweights wasted little time meeting in the middle of the cage and just throwing down. Even though the fight went the full three rounds, there was little doubt that these two had one thing in mind, knocking the other one out. A solid three round bout that showed why the lighter weight divisions are just as entertaining as the heavier weight divisions.

–Performance of the night: Jim Miller. After his fight with Melvin Guillard, Jim Miller admitted that he had never been hit as hard as he was by Guillard. However he worked through the damage, focused on the task at hand and capitalized on the opening Guillard left for him to gain the victory.

-Finish of the night: Josh Neer. As Duane Ludwig looked to create enough space to get to his feet, Josh Neer found an opening and clamped on a guillotine choke that quickly put Ludwig to sleep. A quick and efficient choke from Neer earns him this honor. 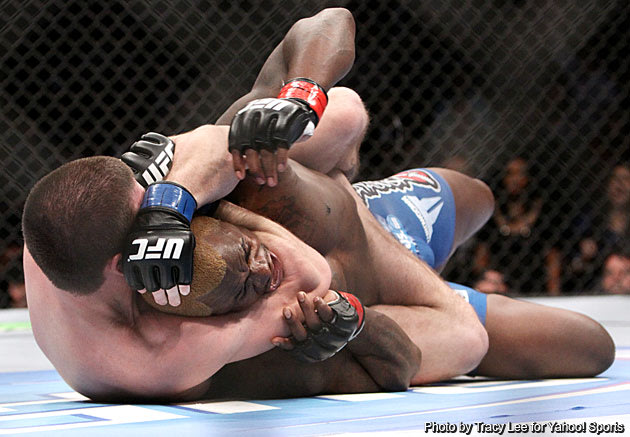